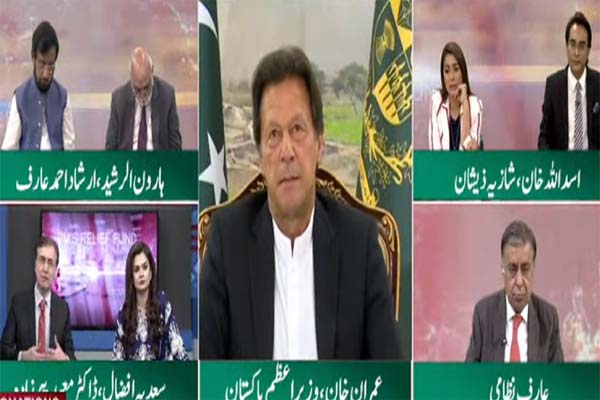 ISLAMABAD, Apr 10 (APP):Prime Minister Imran Khan Friday expressed the hope that Pakistan would defeat the coronavirus and emerge as a stronger nation provided the people adopted the recommended precautionary measures and showed compassion to their poor countrymen in the distressing time.
During a telethon hosted by a private television channel (92 News) to raise donations for the Prime Minister’s Corona Relief Fund, he said the objective of the fund-raising was to prepare for the worse situation as the national institutions would not be able to cope with the one like New York or Iran.
Imran Khan said the people were not still aware of the economic repercussions of the lockdown, which had also compelled the biggest economies to announce relief packages to support their people.
The United States had announced a relief package of $2,200 billion, Germany with a population size half of that of Pakistan, € 1,000 billion and Japan $1,000 billion, while Pakistan could manage a package of $8 billion only.
He said Pakistan did not have enough resources to cope with any worsened situation but it was lucky for being rich with charitable people and a huge young population.
He said the government had already launched a Rs 144 billion programme to distribute Rs 12,000 each among around 12 million families, while the public donations were meant to meet the future needs because no one knew when the crisis would be over and what would be the future scenario.
The prime minister warned the people that the corona cases would increase in the coming days and only those maintaining social distancing would remain safe. Taking precautions was the only the solution to defeat the virus because Pakistan’s health system did not have enough ventilators or other required equipment to deal with the crisis.
He assured that all the public donations would be used to support the poor as their numbers would be growing continuously owing to the closure of industries and businesses.
He said the government had set up a transparent funds distribution system based on the database of National Database Registration Authority (NADRA). In order to avert the mismanagement experienced during the relief operations after 2005 earthquake and 2010 floods, a web portal would be launched soon to guide the charity organizations as to where they should deliver the relief goods considering the people’s needs.
He said after April 14, the government would open up the construction sector to revive the employment opportunities for the poor people.
The prime minister said from the very first day, he had been opposing the blanket lockdown owing to its adverse impact on the poor.
“There is a difference between the lockdown in DHA or E-7 sector and Machhar Colony and Orangi Town. It would be a joke with the people living in population clusters and slums to maintain social distance and observe cleanliness when they even lack clean drinking water,” he commented amid the continuous phone calls from from Pakistan and abroad with the people pledging varying amounts to the relief fund.
He said the negative impacts of the lockdown were already emerging in those countries which had made the hasty decisions following the Chinese or Western models.
He said the Western countries had a registered labour making easy for the governments to extend assistance while almost 80 percent of Pakistan’s labourers were unregistered.
To a question, the prime minister said all of the health workers, particularly those deputed at the ICU (intensive care units) and emergency departments would receive their protective kits within a couple of days and assured them of the government’s full support.
He said no single province or government could handle the situation alone rather it required coordinated efforts and the National Command and Control Committee had the representation of all provinces as well as medical experts to make the coordinated decisions.
The prime minister said the Tiger Force would be utilized to supply ration and identify the poor in their respective areas where there would be lockdown after the detection of corona cases. Even the developed countries like the United Kingdom and the US had also announced to engage the volunteers, he added.