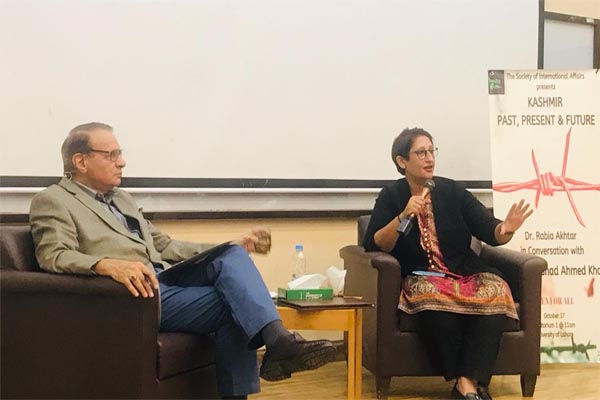 KARACHI, Oct 18 (APP):Member of the Prime Minister’s Advisory Council on Foreign Affairs Dr. Rabia Akhtar Friday said this was the first time that in 72 years that India itself had internationalized the Kashmir Issue, as the headlines and editorials in every leading newspapers talked about human rights violations in Kashmir.

Addressing a lecture on “Kashmir: a nuclear flashpoint” organised by the
Pakistan Institute of International Affairs (PIIA) in its library, Dr. Rabia said the issue of Kashmir later was taken over by what was happening in Syria with the Turks and the Kurds and the Middle-East and then the Trump with his tweets gained all the attention.

She said, “We needs to keep the world involved in Kashmir in the same way
as the prime minister addressed over the issue in UNGA.”

Recalling an interview of General Khalid Kidwai who was the founding Director General of Strategic Plans Division which was the Secretariat of National Command Authority and served the post for around 16 years, Dr. Rabia Akhtar said General Khalid Kidwai gave four red lines for Pakistan which if crossed can push Pakistan to contemplate the use option of war including special threshold, military threshold, economic threshold and social-political threshold.

Member of the Prime Minister’s Advisory Council on Foreign Affairs
said according to General Khalid Kidwai the special threshold was if India attacked Pakistan and conquered large part of its territory, that would be the time Pakistan would consider to utilize its nuclear weapons.

Dr. Rabia Akhtar said that these threshold were massive which could have
been interpreted in one way or many.

She said in February this year the way Pakistan retaliated post Balakot strikes defined the country’s predictive behavior. In past, India or Pakistan invited the third party to play its role as a crisis manager for crisis termination or the third party itself intervened keeping in view the picture before the escalation happened between the two countries but in the post Pulwama and Balakot crisis the most important role of crisis termination manager was played by Pakistan itself.

The leadership variable was the most important variable in this regard. The unconditional release of captured Indian pilot and peace gesture chosen by Prime Minister Imran Khan towards India at the height of crisis was unprecedented behavior.

She said here the return of Indian pilot and Pakistan’s retaliation showed the capability of the country to fight a conventional war without invoking a nuclear war and required the literature to be re-written.

Pakistan had generated enough momentum in the international community to
look at Kashmir as a human rights issue.

She said Indian Army Chief and others were talking about wars with Pakistan and on the contrary we were only seeking peace.

Earlier, PIIA Chairperson Masooma Hassan delivered the welcome address
and introduced the guest with the audiences.