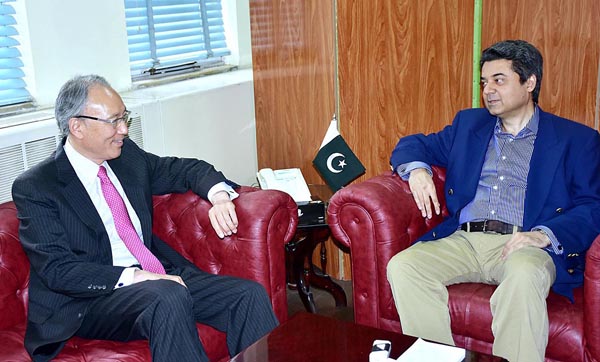 ISLAMABAD, May 24 (APP):Federal Minister for Law and Justice Barrister Dr. Muhammad Farogh Naseem said that Japan can have Pakistan as an important ally in the region to upgrade the economic relations.

The minister was talking to the Japanese Ambassador to Pakistan Kuninori Matsuda who called on him at the Law Ministry on Thursday, said a press release.

The Law Minister congratulated the Japanese Ambassador on assuming charge. He told the Ambassador that Pakistanis admire Japanese people and value their friendship with Japan.

Kuninori Matsuda said there are a number of areas where both Japan and Pakistan can collaborate in future in addition to Automobile Industry.

He said both countries can work together to improve food and fishing industry in Pakistan, education and women empowerment.

He further said an MoU was signed between Japan and Pakistan to help provide technical internship trainings to Pakistanis in the Japanese companies.

He further said that the Japanese due to their shrinking population plan to open their labour market to the world and Pakistanis in particular since those living in Japan are the most law abiding and peaceful citizens.

Dr. Farogh Naseem said Pakistanis consider the simple way of living of the Japanese as very close to their religion.

He said culturally the two countries were very close. He invited the Chinese Ambassador to meet the business community in Pakistan in order to upgrade the economic relations between the two countries to a new level.

Japanese Ambassador said Pakistan’s location was very important in the region as a market for the neighbouring countries. He said Japan can play a role to defuse tensions between India and Pakistan and help the two countries have a healthy relationship.

The Law Minister thanked the Japanese Ambassador and told him Pakistan wants peace in the region that is only possible through dialogue and peaceful resolution of Kashmir issue.

Pakistanis have never resorted to bashing India even during General Elections and we know the consequences of an escalation can be deadly.

We want all the issues to be resolved so that the region and the world becomes a better place, he said.