Both the sides expressed satisfaction over the completion of 75 years of diplomatic relations between Pakistan and the United States, said a statement issued here.

They also stressed the need for a broad-based dialogue to promote relations between Pakistan and the United States.

Todd D. Robinson said Pakistan and the United States have a long-lasting relationship. Pakistan’s efforts to curb money laundering and drug trafficking were commendable, he added.

He said both Pakistan and the US Drug Enforcement Administration were pleased to have completed 40 years of relations. We would continue to provide technical and financial assistance to Pakistan for drug prevention, he added.

He said Pakistan has unanimously passed the necessary legislation in Parliament to curb money laundering. The legislation would pay way to remove Pakistan from the FATF’s gray list, he added.

Rana Sanaullah said Pakistan has done an exemplary job to curb money laundering. An anti-money laundering directorate has already been set up at the FIA headquarters, he added.

He said Anti-money laundering police stations have been set up at FIA zonal level.

He expressed the hope that with such measures, Pakistan would be removed from the FATF gray list in October.

He said the Pakistan Coast Guard has played a key role in curbing drug trafficking through sea routes. Partnering with the INLEA would further improve drug prevention, he said.

The meeting was attended by a delegation led by US Ambassador to Pakistan Donald Bloom and other officials of the US Embassy. FIA and Foreign Ministry officials, including Interior Ministry Special Secretary Saif Anjum, were also present at the meeting. 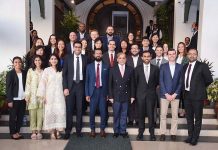