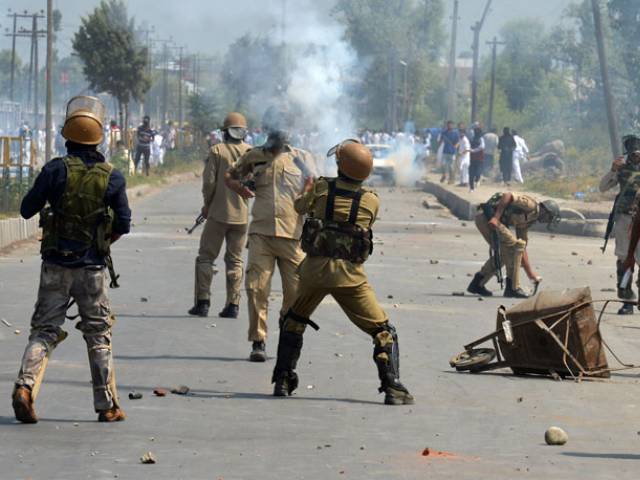 ISLAMABAD, Jun 15 (APP):Speakers at a webinar hosted by Kashmir Institute of International Relations (KIIR) in collaboration with World Muslim Conference (WMC) have urged the international community particularly the United Nations to take effective notice of impending genocide of Muslims in the Indian occupied Jammu and Kashmir.

In his initial remarks the KIIR chief while referring to dire situation in the occupied territory said international experts have already warned of impending ‘genocide’ of Muslims in Kashmir. He said that in the aftermath of 5th August 2109, the apartheid regime launched a massive and multifront political, social and cultural onslaught on Kashmiris.

Citing the patterns and typology of genocide in the restive region, he said, “Erasing Kashmiris’ political identity, disempowering Muslim majority community to reduce them to 2nd class citizens, turning them into a political minority, minimizing their role in political decision-making process are the most vivid signs and processes of genocide that serve as eye opener for the world community”. He said that after unleashing a reign of terror in the region, the racist regime was now shamelessly playing the religious card to get its communal agenda implemented in Kashmir.

Taking a leaf out of the former governor Jagmohan Malhotra’s rule book, he said, “The BJP seems to be on the verge of repeating history”. He said that a certain section of the Kashmiri Pandit community under a vested agenda was ready to become pawns in the BJP’s chessboard of power and politics in India. He, however, observed that a silent majority of Pandits within and outside the valley knew fully well how the right-wing forces had been using them as pawns.

The Indian troops deployed in the territory, they said, have been operating under black laws such as Armed Forces Special Powers Act, the Public Safety Act and other martial laws that have given Indian troops complete impunity. They further said that soon after the abrogation of article 370 & 35A the Indian occupation forces started the anti-Muslim pogrom in the occupied territory.

Terming the systematic killings of innocent Kashmiris as a genocide, they appealed the international community and human rights bodies to take effective notice of the impending genocide of Muslims in the region. Speakers condemned the Indian courts verdict against JKLF chairman Muhammad Yasin Malik and termed it as political motivated to silence the dissent in occupied territory.

Webinar remembered the veteran Journalist Dr. Shujjat Bukhari on his forty death anniversary and paid rich tributes to him. Webinar urged Human Rights Council to appoint a special rapporteur on the human rights situation of IIOJK.