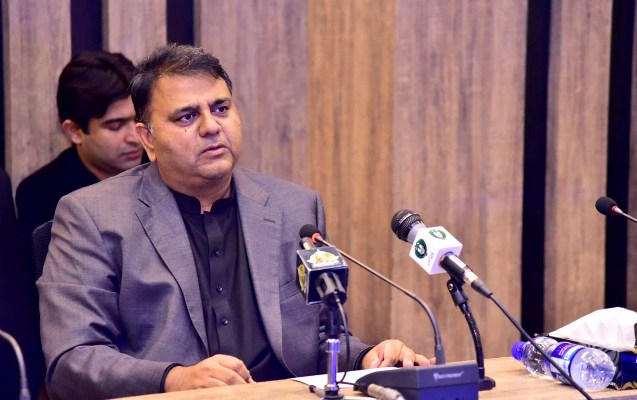 ISLAMABAD, Oct 29 (APP):Minister for Information and Broadcasting Chaudhry Fawad Hussain on Friday passionately called upon Ulema to play their role for maintaining peace by discouraging elements using name of Islam for political gains.

“Creating unrest and engaging people in the name of religion is a disservice to Islam,” he told media persons in apparent reference to the proscribed Tehreek-e-Labbaik (TLP)’s ongoing long march.

He said finality of Holy Prophet (SAW) could not be used for political gains as it was not only ‘politically uncivilized, but also had bad impact on Islam.
There was 97 per cent population of Muslims in the country, he said, adding the belief on Islam could not be completed without accepting the concepts of ‘Toheed’ and ‘Risalat’ whole-heartedly.

“The painful thing is that when someone used name of Prophet (SAW) for his politics,” he said, adding it seemed that an atmosphere of fear had been created in the country which forced every Muslim to come forward and prove his faith.

Fawad said the government had exercised enough restraint, besides showing maximum perseverance in the case of proscribed TLP, but it was inappropriate to challenge writ of the state which homed to 220 million people and was fifth largest country of the world and a nuclear power. He said the entire Ummah found blessings in Sunnah of Holy Prophet (SAW), but it was unfortunate that the TLP was creating unrest in name of Muhammad (SAW) who declared removing obstacles from a pathway as a virtue.

“Love for Prophet (SAW) means extending love to every human being as Islam preached peace and tranquility,” he remarked.

The minister made it clear that the government would ensure writ of the state at all cost and go to every length to protect lives and properties of the people.
As far as the personality of Holy Prophet (SAW) is concerned, he said nobody could deny that it was only Prime Minister Imran Khan who had taken practical steps against Islamophobia and for promoting ‘Seerat ul Nabi.’

The prime minister has established ‘Rehmatul-lil-Aalameen’ Authority to disseminate the teachings of the last prophet Muhammad (SAW). Such chaos was conspiracy against Islam which aimed at dividing people in the name of religion, he added.

In the recent clashes between police and the proscribed TLP, he said five policemen embraced martyrdom, 49 inflicted injuries and 14 were in critical conditions, while in their previous protest, six personnel were killed and some 700 got injured.

“Let me clarify that do not consider the state as week as I have already stated that Pakistan had defeated many major terrorist organizations in the past, so such mobs cannot stand before the state and neither will we let them to go beyond a certain limit,” he stressed. Fawad said people who were joining the TLP long march were their own people.

” Why the government will want spill blood on roads and disturb law and order situation,” he questioned.

“We had had negotiation with TLP in the past and now we ask them to return home. Peaceful protest is right of everyone, but if you think that you can get your demands approved from the government with using batons, killing policemen and burning properties of people then it is impossible,” the minister noted.
“We will go to every extent if you behave in that way,” he added.

Fawad said the Interior Minister had said in morning that negotiation was underway with the proscribed TLP, but the first condition of negotiation was that it should be done in accordance with law and constitution.

“We will not surpass our judicial system and all the decisions will be taken and matters to be sorted out in line with the system which was enshrined in the law and constitution,” he added.

The minister said the government’s restraint must not be considered as weakness of the state.

However the security forces, government were ready to face any eventuality, he added.

“If existence of state is endangered – the writ will have
to be established,” he said.

Fawad warned the protestors to avoid head on collision with law enforcement agencies as such tactics could not yield desired results and might prove detrimental for them, adding the government could not tolerate such protest for long as it had its limitations.

“ Some of the protestors are the part of their protest as a fun,” he said.
The government would never tolerate spilling of blood on roads and want to resolve the issue through peaceful negotiations, he said, adding the government would try utmost to avoid clash with protestors as early resolution of the issue was better as roads closures could not be tolerated for long.

Tehreek-e-Labbaik Pakistan (TLP) was in the habit of starting violent protests whenever economic started signs of recovery, he said adding the prime minister and all NSC members including armed forces personnel had categorically said that the whole nation was against such violent protests.

The minister said TLP’s last violent protest had gotten massive support on social media from India and its nexus would be exposed with India.

Responding to a question about release of TLP Ameer Saad Rizvi, he said there was no monarchy in the country and Rizvi could only be freed through legal process.
There were 98 cases against Saad Rizvi, he added.

Divulging details of the NSC meeting, he said it was emphasized that the entire leadership would stand behind the Punjab police and Law enforcement agencies. It also paid tributes to them for rendering service to ensure security of laymen, he added, The prime minister and National Security departments made it clear that the entire country and civil-military leaderships were on same page in this matter, he said adding ” We are reviewing this issue with quite seriousness and care.”

“I once again urged the people who had joined their gathering for the sake of fun to return home and also asked their families to call them back as the government cannot tolerate such thing as it had some limitations,” he appealed.