ISLAMABAD, Nov 26 (APP): State Minister for Information and Broadcasting Farrukh Habib Friday said the Sindh government was exploiting the people of the province in connivance with various mafias.

Talking to media persons, he said “Sian Sarkar” government was totally oblivious from the problems being faced by the masses and doing nothing to resolve their issues. The people had been left at the mercy of mafias. Hoarding of various daily use items especially urea was rampant in the province.

The dreaded mafias including hoarders, profiteers and others were plundering the people of Sindh province sans any check.

He said the Sindh government did nothing to decrease the price of sugar from Rs150 per kg. Similarly, the price of a 20 kg flour bag was available at Rs1,450 in Sindh as compared to only Rs1,100 per bag in Punjab and the people of Karachi and Sindh were questioning about such a huge gap between prices.

On the contrary, he said Punjab and federal governments had took immediate action against the profiteers and hoarders which helped decreasing the price of sweetener.

In past, farmers were not paid for many months now the PTI government had ensured payments to farmers within a fortnight.

The record of inflation had been broken in the most countries of the world. The incumbent government of PTI was trying its level best to minimize the impact of global inflation on poor people .

The wheat worth billions of rupees was stolen from warehouses of Sindh, and provincial government hushed up the matter by saying that the wheat was devoured by rats.

Prime Minister Imran Khan was doing utmost for the development of Karachi, he said adding the development work in major projects was being carried out by the federal government.

Speaking on the occasion Special Assistant to the Prime Minister on Youth Affairs Usman Dar said over 50,000 across the country youths had already been provided loans under the Kamyab Jawan Programme.

The government had ensured transparency in the disbursement of loans, he added. 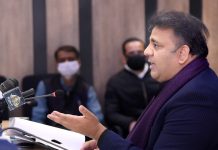