ISLAMABAD, May 15 (APP): Federal Minister for Finance and Revenue Miftah Ismail on Sunday said the government was not raising petrol prices and a summary for that matter has been sent to the Prime Minister Shahbaz Sharif for a swift decision.

“Rising petrol prices causes surge in food prices, which is the core of inflation and affects a common man directly,” he said this while addressing to the media in Press Information Department (PID).

He further said that prime minister wanted to provide relief to already inflation-hit citizens.
However, the minister later tweeted from his official account that the decision taken to keep the fuel prices unchanged was for today. He also added that due to changing circumstances and international oil prices, they may have to revisit their decision soon.

“Let me amplify what I just said in my presser. The government will not raise POL prices today. But due to changing circumstances and international oil prices, we may have to revisit our decision soon,” said the minister

The minister further said that the friend countries including Saudi Arabia had assured economic cooperation and talks were underway for the extension of the deposited period.

He said the Saudis had promised to extend the term of deposits from December, 2022 and also agreed to negotiate an increase in deposits.

Informing about the wheat production which was 26 million tonnes as per the official record, he apprised on the instructions of prime minister, they were keeping the wheat reserves.

He further said that agriculture was an important part of the national economy and the government would extend full cooperation for its development.

Talking about the country’s import sector, he said that according to the current situation, imports were expected to touch $ 75 billion.

However, Miftah said that the exports in return were expected to reach $30 billion, despite after the $30 billion remittance recorded in this financial year, the current account deficit would increase significantly

Miftah regretted that due to the wrong policies of the previous government of Pakistan Tehreek-e-Insaf, there was imbalance between imports and exports.

He further stated that the pace by which the exports were increasing was half the pace compared to rise in imports.

The Minister said that the former PML-N government used to export agricultural commodities including wheat, sugar and urea fertilizer and cotton but under the previous regime we had to import all these commodities.

He maintained that this was due to decrease in production as well as increase in smuggling.

Miftah said that wheat and urea fertilizer were being smuggled to Afghanistan (during the tenure of former government), which had put pressure on the local market and in result commodities became expensive.

He said that during the Covid-19, the former government got enough relaxations as G-20 countries and International Financial Institutions deferred installments on loan repayments which the PTI government could take advantage off.

Moreover, on the losing value of Pakistani rupee (depriciation) against US dollars, the minister asserted that it was again due to dismal economic policies of former government.

He said that at present the State Bank of Pakistan (SBP’s) foreign reserves stood at $10.4 billion, which had fallen to this level due to mismanagement by the previous administration.

Over the increase in national debt during the former government’s tenure, Miftah termed it unprecendented.

He further said that the tax-to-GDP ratio in the previous government also dropped to 8.5 percent. 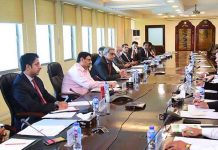 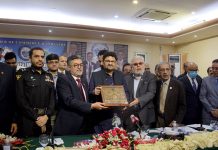 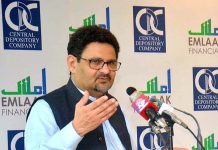