ISLAMABAD, Jan 14 (APP): President Dr Arif Alvi, on Friday, said that the development partners and international community must look into the needs of one billion people with disabilities (PWDs) across the world who had been neglected and were in need of technological assistance.

He stressed upon the international community to make collective efforts to bring ease to the lives of persons with disabilities (PWDs) through the use of assistive technology.

The president made these remarks while virtually addressing the global community at an event titled “Mobilizing on Assistive Technology towards the second Global Disability Summit,” organized by ATscale, the global partnership for Assistive Technology (AT) in collaboration with World Health Organization (WHO). The virtual address of the President was facilitated by WHO Pakistan. The aim of the event was to advocate the importance of increasing access to Assistive Technology on the global agenda.

Addressing the participants, the President observed that 90 per cent of people among the PWDs did not have access to assistive technology and the welfare of PWDs and improving their access to AT was an issue that was very close to his heart.

He added that he, along with Begum Samina Arif Alvi, had been working to create awareness about the rights and issues of persons with disabilities.

He observed that 90 per cent of people among the PWDs did not have access to assistive technology and the world required a policy and affirmative action to improve upon.

“They are neglected and sometimes, require simple things like glasses,” he said sharing that with simple assistive technology, PWDs could be assisted.

“Pakistan has been in the forefront in these global efforts to bring this issue to the attention of the world community,” he added.

He said Pakistan had signed the Convention on the Rights of the People with Disabilities about 15 years ago and it had been the main instrument in bringing the agenda to the WHO executive board as well as the UN General Assembly where in the future, there would be comprehensive discussions.

The president said that Pakistan was making efforts to reach out to the PWDs and help them through the Ehsaas programme.

He said that under the WHO rapid assessment technology, Pakistan had assessed its unmet needs and the resources gap and would make further efforts to bridge the gap.

The President further stressed that during the 21st century, the world must look into the needs of one billion people with disabilities across the world who were neglected and in need of technological assistance, he added.

The President commended the efforts of ATscale and WHO for making efforts to highlight the needs of persons with disabilities and advocating for improving their access to assistive technology at the global level.

It is worth stating that Pakistan has played a leadership role in furthering the agenda of AT at global and regional levels. Pakistan in collaboration with WHO is the first country in the world to develop, table and play a pivotal role in the adoption of the Global and Regional resolutions on AT; launch Assistive Product List during the 69th World Health Assembly, Geneva; develop regional strategic AT framework for 22 countries in the Eastern Mediterranean Region; conduct rapid AT Assessment survey, and adopt Islamabad declaration on AT. 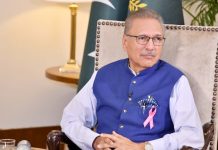