ISLAMABAD, Sep 29 (APP): Prime Minister Shehbaz Sharif Thursday called upon the international community to help Pakistan in the rehabilitation of flood affectees and emphasized that his country was only emitting less than one percent of the carbon emissions but had faced the brunt of floods caused by climate change due to activities in the developed world.

Speaking at a reception here to celebrate the 75 years of Pak-US diplomatic relations, he thanked the United States for its humanitarian assistance of $ 56 million for the flood-hit people.

The US would be supporting Pakistan with another $ 10 million for the flood ravaged population, he mentioned.

The prime minister appreciated the assistance delivered by the United States Agency for International Development (USAID) to the flood affectees, adding still there was a yawning gap between the needs of flood victims and the aid being provided to them.

He said some 1,600 people lost their lives in the floods and more than 400 of them were children. Four million acres of standing crops, including cotton, rice, sugarcane and date palm, perished; a million houses were destroyed, more than a million livestock drowned and life savings of people vanished in the flood waters.

He said Pakistan wanted to build back a resilient and adaptive infrastructure with the help of the international community, in the areas devastated by floods.

The PM said the United States was the first country to recognize Pakistan after its independence and at one time Pakistan received assistance of “wheat parcels” from the US.

He said the two countries had a long journey of friendship which saw its high and low points. He underlined the need to reset ties, based on trust, respect and mutual understanding.

“If we have to move forward and we have to find ways and means to warm up our relations. Our relations should not be seen through the prism of Afghanistan and lens of China.

“We want to be back to the wonderful time when the US-Pakistan relations were not beholden to others but had their own standing.”

Then General Electric – a blue chip company of the United States helped Pakistan in generating 3500 megawatts and it was the most transparent project with low cost and the plants were installed in the fastest possible time.

He said the United States was the largest trading partner of Pakistan.

He assured that he would be the most ardent supporter of normal and friendly relations between Pakistan and the United States and said the two countries should undertake “sincere and serious” dialogue to take forward their bilateral cooperation and leave behind what had happened in the past.

He recalled his and Foreign Minister Bilawal Bhutto Zardari’s recent meetings with US President Joe Biden and Secretary of State Antony Blinken and said the interactions were reassuring for the two sides.

He reminded that if the aid of $ 32 billion given to Pakistan by the US in the past would have been spent in the right manner, his country would have broken the begging bowl.

He said the people of Pakistan were educated, very brave and hard working and they would lead Pakistan to economic prosperity.

Earlier, the reception started with a one-minute silence to express condolence over the death of people and to convey grief to those who had lost their livelihoods in the devastating floods.

The federal ministers and US Ambassador in Pakistan Donald Blome attended the reception. 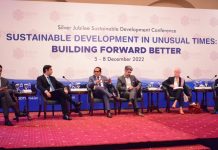