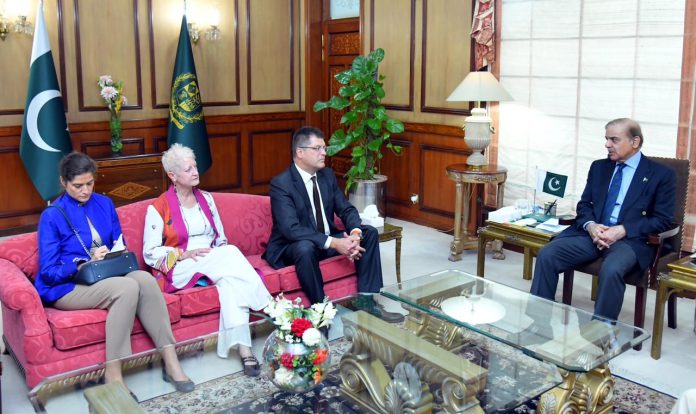 ISLAMABAD, Oct 4 (APP): Prime Minister Muhammad Shehbaz Sharif on Tuesday said that Pakistan greatly valued its relationship with the European Union that were based on shared values and common objectives of peace, prosperity and development.

The prime minister appreciated the EU’s assistance in the wake of climate-induced massive floods in Pakistan.

The prime minister was talking to European Commissioner for the Crisis Management Janez Lenarcic who called on him.

Expressing satisfaction at the high-level engagement between the two sides, the prime minister expressed hope that both sides would continue to work together to further enhance their bilateral trade and investment ties, so as to benefit from the GSP Plus Scheme, post 2023.

He also shared the details of the devastation caused by the floods to crops, housing, livestock and critical infrastructure, as well as death of more than sixteen hundred people.

The prime minister underlined that Pakistan while being a most negligible contributor to global carbon emissions, was amongst the most vulnerable countries to the impact of climate change.

He expressed the hope that the international community would step up its efforts to mitigate the negative consequences of the floods, through active participation in rehabilitation and reconstruction phase.

Prime minister Sharif also highlighted the efforts undertaken by the government which included humanitarian response for the people in the affected areas and establishing of Prime Minister’s Flood Relief Fund-2022, for providing relief and rehabilitation to the affectees of torrential rains.

The fund accepted donations/contributions both from domestic and international sources.