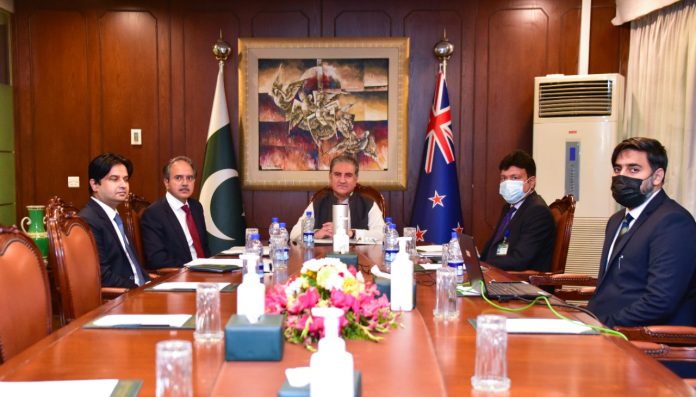 “On New Zealand Cricket Board’s last-minute decision to cancel Pakistan tour, Pakistan expected New Zealand to share the information that led to that decision to call off the tour,” Qureshi said as he received a video call from New Zealand Foreign Minister Ms. Nanaia Mahuta.

The Foreign Minister conveyed that it [the New Zealand Crickket Board decision] disappointed millions of cricket lovers.

He also suggested that New Zealand Cricket Board may consider and indicate another opportunity for the Pakistan tour.

During the video call, the two Foreign Ministers discussed the whole range of issues concerning bilateral relations and regional cooperation, a press release issued here by the Ministry of Foreign Affairs said.

Foreign Minister Qureshi while appreciating the steady progress in multi-dimensional bilateral relations over the years based on mutual trust and understanding, renewed strong desire and commitment to consolidate and further enhance cooperation in diverse fields in line with shared objectives of peace and development.

He also highlighted the ongoing gross human rights violations committed by Indian Security Forces in the Indian Illegally Occupied Jammu and Kashmir (IIOJK) and underscored the need for the international community to help address the serious situation and facilitate a peaceful resolution of the Jammu & Kashmir dispute.

Foreign Minister Qureshi briefed his counterpart on Pakistan’s constructive role in support of efforts for peace and stability in Afghanistan.

He underscored the importance of inclusive political settlement, need for the international community to positively engage with Afghanistan, and provide urgently needed humanitarian assistance.

Foreign Minister Mahuta conveyed profound gratitude for Pakistan’s facilitative role in safe evacuation of their nationals and others from Afghanistan.