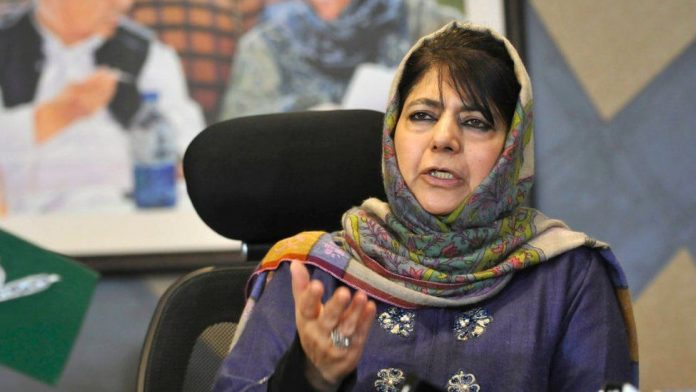 According to Kashmir Media Service, Mehbooba Mufti in a tweet said, “Of all the crimes we could commit as Kashmiris, advocating for ourselves carries the greatest punishment. And punished we are through measures like arrests, killings, raids and chance encounters so that we learn to accept abuse and not stand up for ourselves”.

Referring to the killing a Kashmiri youth, Showkat Sheikh in a fake encounter in Kupwara, she said he was arrested in Shopian and was being investigated in police custody while there was an encounter in Kupwara and the police claimed he was among the militants killed there (Kupwara).

“For a Kashmiri to walk to his corner shop has become a risky proposition. If he is lucky he will be briefly accosted by military, but there is a good chance he may never make it home and instead make the headlines for being shot in a chance encounter,” the newsletter said.

New Delhi says “you never know who you truly are until your back is against the wall. We cannot stick our head in the sand. Fear is a primal emotion that will keep us stuck and turn us into zombies that do and say exactly what the oppressor wants us to.”

Referring to the Bharatiya Janata Party leaders’ photos with an alleged militant in Jammu and the man who killed at tailor in Udaipur, Rajashtan, Mehbooba Mufti said if an opposition leader would have been photographed with “arrested militant Talib Hussain”, he would have been slapped with FIRs and the BJP “trolls” would have been crying for his blood.