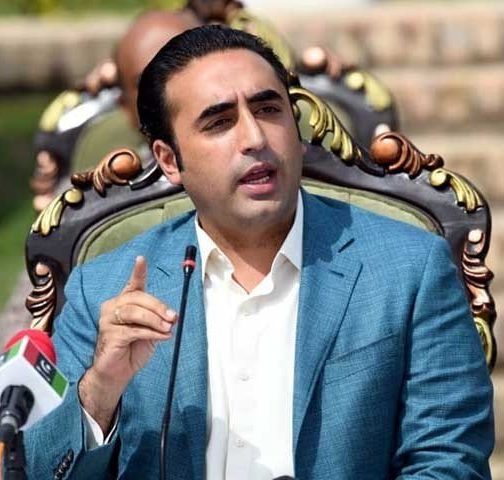 ISLAMABAD, Aug 5 (APP): Foreign Minister Bilawal Bhutto Zardari on Friday urged the UN Security Council, and the Secretary- General to make concerted efforts to promote a peaceful settlement of the Jammu and Kashmir dispute in accordance with the relevant UN Security Council resolutions and the wishes of the Kashmiri people by fully utilizing the modalities provided for in the UN Charter.

The Foreign Minister said in a comprehensive letter addressed to the President of the United Nations (UN) Security Council, President of the UN General Assembly, Secretary General of the UN, and the UN High Commissioner for Human Rights regarding the alarming situation in Indian Illegally Occupied Jammu and Kashmir (IIOJK) in the wake of India’s illegal and unilateral actions of 5 August 2019.

The letter emphasized that the illegal measures taken by India three years ago constitute a flagrant violation of international law including the UN Charter and the relevant UN Security Council (UNSC) resolutions.

“It points out that, in accordance with UNSC resolution 122 (1957), all the unilateral actions taken by India on and after 5 August 2019 are not only illegal but, ipso facto, null and void,” a press release issued here by the Ministry of Foreign Affairs said.

The Foreign Minister also underscored that as part of its brutal colonial enterprise to deny the right of self-determination to the Kashmiri people, India has resorted to a series of illegal actions, gross and widespread violations of human rights, and other crimes, including: extra-judicial killings of innocent Kashmiris in fake encounters; custodial killings and “cordon-and-search” operations; use of pellet guns to kill, maim and blind peaceful protestors; abduction and enforced disappearances of 15,000 young Kashmiri boys; incarceration of almost the entire Kashmiri leadership; and ‘collective punishments,’ with the destruction and burning of entire villages and urban neighbourhoods.

“Incarceration of almost the entire Kashmiri political leadership, the brutal and inhumane treatment meted to them, and their sham trials and convictions are among India’s attempts to punish Kashmiri leaders seeking freedom by peaceful means.”

He also highlighted that the illegal demographic changes being undertaken by India in the occupied territory are also in gross violation of international law including the 4th Geneva Convention.

The Foreign Minister recalled that the only legal basis for the resolution of the Jammu and Kashmir dispute is the UNSC resolutions, stipulating that the final disposition of the State of Jammu and Kashmir is to be decided by its people through the democratic method of a free and impartial plebiscite conducted under the auspices of the UN.

-Establishment of a Commission of Inquiry as recommended by OHCHR’s two Kashmir Reports to investigate the reported human rights violations;

-An updated assessment by the UN High Commissioner for Human Rights in the form of a third Kashmir report;

-Appointment of a Special Rapporteur to address the human rights and other dimensions of the situation in IIOJK by the Human Rights Council;

-A visit by the UN High Commissioner for Human Rights to Jammu and Kashmir to evaluate and report on the situation;

-Examination by the UNSC, HRC, and all relevant UN bodies, of the considerable evidence available of India’s human rights violations in IIOJK and creating accountability mechanisms;

-Asking India to release all Kashmiri political prisoners and the abducted youth, and assure freedom of expression, movement and association throughout the occupied territory.