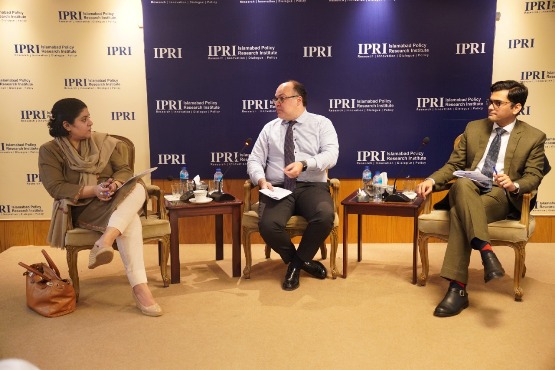 He delivered an exclusive talk on “Preventing and countering violent extremism in the Indo-Pacific: Policy, programming and the challenge of capacity building.”

The discourse was part of the Islamabad Policy Research Institute Distinguished Lecture Series.

The distinguished scholar who has immense experience in counter-terrorism studies said “‘Counter Violent Extremism’ is almost a science, and a durable solution to extremism literally depends on articulating political tools and an appropriate strategy to address revulsion”.

He said the National security and development priorities of member states matter a lot in defeating insurgencies and terrorism.

This is why there is a chord between extremism and terrorism, he said, adding that though the focus was on Islamist movements and the wayward activities of non-state actors, the debate was humbly graduated to list out the irritants in the socio-economic milieu of the region and beyond.
Dr Snider’s scope of study was Malaysia, Indonesia and the Philippines, as he shed light upon extremism and terrorism tendencies in the region.

He further said prevention is a political process and thus political engagement and people inclusivity will allow the state to have a successful CVE and CT strategy – and its ownership on all levels is of utmost importance.

For Pakistan, the counter terrorism (hard strategy) was easier to implement than Counter Violent Extremism, (softer strategies) and that’s why there needs to be more investment in long-term softer strategies for sustainable peace, Dr Arshi Saleem observed.

With a case study on Indonesia, Dr Joshua, explained how terrorism mixed with struggles of secular nationalism versus what people wanted — the globalization of the religio-political ideology only added to this violent extremism.