Addressing a press conference at Circuit House here on Monday, he said that the trio of Maulana Fazlur Rehman, Asif Ali Zardari and Sharifs had indulged in unethical practices in the name of democracy and offered money to the PTI parliamentarians to deceive and cheat their leaders against their conscience.
He termed horse trading a severe attack on true democracy.

He said that the public rallies against the dissidents had proved beyond any doubt that masses “were with the PTI, they are with it, and they will remain loyal to the PTI”, which was striving to solve their genuine problems despite of critical economic situation.

He also appreciated the positive response of Prime Minister Imran Khan, who had announced forgiving the deserters if they were ready to repent their wrongdoing. He said that they had witnessed the people’s reaction and hence they should return to their party; otherwise, people would not only boycott them politically but also socially. He appreciated the elected parliamentarians who refused to bargain with the opposition and rejected their huge financial offers to side with them.

Responding to a question, he said that the issue of “No confidence” was pending in the Supreme Court as the speaker had convened the session on March 25. “If anybody has reservation against it, he can also consult the apex court,” he added.

He said, “We do not want chaotic situation in the county, as the PTI has worked day and night to restore law and put the economy in the right direction.” He said that various development projects were in progress in Faisalabad division currently, as the PTI government had allocated huge funds for the city. He said the people of the division had reposed confidence in the leadership of Prime Minister Imran Khan during General Election 2018.

He said that a new ICU (Intensive Care Unit) was being set up at District Headquarters (DHQ) Hospital Faisalabad and a state-of-the-art IT University would also be established in the city. 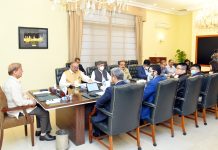