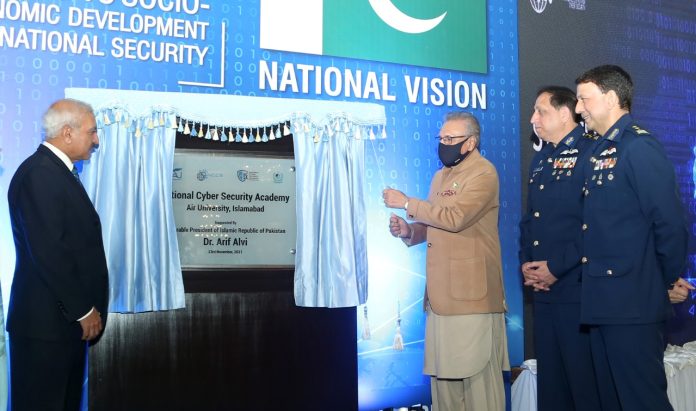 ISLAMABAD, Nov 23 (APP): President Dr Arif Alvi on Tuesday said amid the global challenges of cyber-attacks, it was important for Pakistan to build national capabilities in cyber security to protect its important systems and data.

Addressing at the inaugural session of 2nd annual International Conference of Cyber Warfare and Security, the president said preparing indigenous professionals and solutions was vital to reduce the risk of cyber-attacks, particularly against the country’s defence, energy and financial infrastructures.

President Alvi said the attainment of strong capacity in cyber security was significant for both defensive and offensive strategies as the world witnessed rapid technological advancement.

He said a national vision of a secure and robust digital ecosystem would lead the country to socio-economic development.

He mentioned that cyberspace had recently attracted the attention of many developed and developing countries with reports of government websites being hacked and sensitive data stolen by foreign groups.

He said with quantum computers coming to future, it would become highly difficult to secure data for a country unless production of its indigenous hardware and software.

He pointed out that cyber-attacks could affect the nation’s infrastructure and damage its economy.

To create cyber security awareness, he said, there was a dire need for Pakistan to produce graduates and human resource capable of handling the challenges of cyber security.

The president, who inaugurated on the occasion the National Cyber Security Academy, lauded the efforts of the Pakistan Air Force to emerge as an effective ubiquitous and highly responsive cyber force.

He expressed confidence that under the patronage of PAF and Higher Education Commission, the academy would prove as a milestone towards safe, secure and sustainable national cyber security.

Besides defence, Dr Alvi said, it was high time for Pakistan to secure its boundaries from all sorts of cyber-attacks in domains including politics, industry and culture.

He mentioned in this regard the initiatives including artificial intelligence, strengthening of the aerospace industry to gain self-reliance, malware detection, hardware and software evaluation, the establishment of PAF’s first cyber security park and full operationalization of the PAF’s cyber command by March.

Director National Centre for Cyber Security (NCCS) Dr Kashif Kifayat said the Air University and NCCS were collaborating on indigenous tool development to tap the international market. The cyber security academy would act as a platform for researchers and industry to improve the digital landscape of the country, he added.

The Chief Security Officer of Huawei Pakistan said as cyber security became fundamental to business, Huawei was building a cooperative digital ecosystem in 170 countries with a comprehensive global security system.

Executive Director Higher Education Commission Dr Shaista Sohail said the HEC was upgrading the academic course of cyber security to BS and PhD levels and also considering including it as a mandatory subject in universities for creating awareness among the new generation.