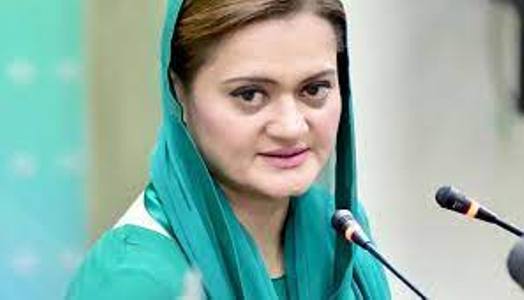 ISLAMABAD, Jun 10 (APP): Minister for Information and Broadcasting Marriyum Aurangzeb Friday said the
government had presented a progressive and inclusive budget for the fiscal
year 2022-23 which would bring back the economic stability, inherited
by Pakistan Tehreek-e-Insaf’s (PTI) regime in 2018.
Talking to the media persons at the Parliament House, she said it was historic
moment for the country as the government presented a people-friendly
and pro-poor budget despite the difficult conditions of the International Monetary Fund (IMF).
Divulging details, she said historic relief measures were taken for
the agriculture sector in the budget for the next financial years.
She said the agriculture was declared as zero-tax industry to boost
the crops production. Likewise, income tax and sales tax on the
agricultural inputs had been abolished, she added.

Zero custom duty had been announced on the import of agricultural
equipment, she said, adding it was unprecedented in the country’s
history.

She said such measures would uplift the agriculture sector which was
crucial to bring economic stability in the country.
Similarly, Marriyum said incentives were also announced for
Information Technology sector to promote IT-based exports in the
country.

Historic announcements had also been made in the field of food
security to ensure supply of edibles, she said adding special
measures had been proposed in the budget for the socio-economic development of youth.

She said despite the tough conditions of the IMF, income tax limit had been increased from Rs 600,000 to Rs 1.2 million per year for providing relief to the middle class.

“People earning up to Rs 12 lakh will not have to pay any tax,” she said.
Marriyum Aurangzeb said historic announcements had also been made
in the budget for the film industry which would enable the country’s
youth to promote their heritage and culture through film production
and broadcasting.

“The move will not only promote Pakistan’s culture and tourism but
also restore Pakistan’s positive image at global level” the
minister said, adding for the first time, the film industry had been
given a complete tax exemption.
Marriyum said that for the first time, medical insurance had been
introduced for artists and incentives had been given to film
producers.
During the past 35 years, cinemas had been completely shut down, while many
popular cinemas were replaced by wedding halls and petrol pumps,
and the means of promoting the country’s culture had ended, the
minister lamented.

Taking a dig at former prime minister Imran Khan,she said one
incompetent person was today making a claim that his party had
brought the growth rate to five percent.

The minister said Prime Minister Shehbaz Sharif had announced a
10% increase in the pensions after taking oath and now in the budget
pensions had also been increased by 5 percent.