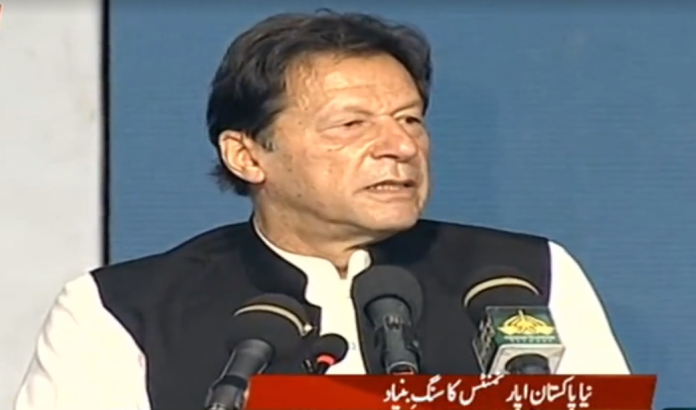 “The status quo doesn’t allow change. It makes them lose their money [earned through corrupt practices]. How will they make money if they don’t resist change? This way, a whole [vicious] system is developed in the society,” the prime minister said while addressing the groundbreaking ceremony of affordable apartments for the low-income group here.

He was referring to the resistance faced by the government from various lobbies, and sectors, in its efforts to bring automation aimed at eliminating corruption.

Under the LDA City project, a joint venture of Naya Pakistan Housing Authority and LDA, a total of 35,000 modern apartments would be constructed for the low-income group under Prime Minister Imran Khan’s initiative to provide housing facilities.

In the first phase of the project, 4000 apartments would be constructed, out of which 2000 have been allocated for the government employees getting less than Rs 50,000 per month in salary.

In order to ensure transparency in the project, a computerized balloting would be held soon and the Prime Minister would initially distribute allotments among the applicants selected through balloting.

The prime minister appreciated the Punjab chief minister, cabinet members and particularly LDA Vice Chairman Imran Munir for putting in all efforts to pave way for the mega pro-poor project.

Imagine the impact on the disenfranchised segment the brilliant Prime Minister is making!

He said the project’s launch was impossible without the passage of foreclosure law for mortgage finance and thanked the judiciary for resolving the issue pending since years.

Imran Khan said in Pakistan, mortgage finance stood at around 0.2% against above 80pc in western countries.

He said the passage of the foreclosure law enabled the people without cash to buy or construct their own house. The people would be able to avail the housing finance by paying the instalments from the money they use for house rent.

The prime minister said he had seen deteriorating the system in the country and it required a vision and commitment to change the corrupt system.

“But it is doable as we know many countries which have transformed themselves. We will have to change ourselves if Pakistan has to meet the 21st-century challenges,” he remarked.

He again appreciated Imran Munir for bringing in automation to facilitate the construction sector which was booming in the country evidenced by the record cement sale last month.

He also appreciated Naya Pakistan Housing Authority for holding sessions with State Bank, FBR, and commercial banks to bring maximum ease for the construction sector as well as remove hassles from the housing loan process.

Imran Khan told the gathering that the construction industry supported another 30 allied industries, thus becoming a major sole source to boost the economy.

The prime minister also spoke high of Punjab Bank President Zafar Masood for supporting the wealth creation, like any “outstanding” banker and contrary to some typical banks which banked upon government’s deposits.

Referring to his vision of Naya Pakistan and Madina State, the prime minister said Madina state was based on two golden principles of rule of law and humanity.

He said the today’s Scandinavian welfare states and others in the West were also pursuing the very noble principles.

“Today, a full battle is going on Pakistan to make big mafias accountable before law. There are big political mafias too which are resisting the rule of law. This a defining moment of Pakistan. As we establish the writ of law, the society will liberate,” he said.

He said the Madina state had taken full responsibility for its poor people despite resource constraint.

He said the incumbent government was also trying to follow the same principles by extending universal health coverage, building Panagahs and introducing mobile kitchens for the poor.

He said KP government had extended Sehat Insaf Card to entire population while Punjab would also achieve the same by this yearend to make the beneficiaries avail free medical treatment of up to Rs 1 million.

He said even the developed countries did not have such universal health coverage.

He said on Sunday, he would launch an initiative of mobile kitchen to serve free of charge food to the poor people in their respective areas.

Quoting a recently published UNDP report, the prime minister said as per the UN data, the poverty ratio had declined in KP province during last seven years while the human development index had shown a positive trend.

Moreover, he said the government would collect data of its entire population by June which would help the government pay a direct subsidy to deserving people.

“God willing, Pakistan is going to become a welfare state,” he hoped.

Addressing the gathering, Chief Minister Usman Buzdar said the apartment’s scheme would be no lesser than any modern society to be equipped with all amenities including a huge park, underground electricity lines and a cricket stadium.

He said even after project’s completion, the LDA would be responsible for maintaining the infrastructure.

The chief minister said the government was on its course towards fulfilment of its commitments with the people.

President feels people can manage to overcome Covid by sticking to...