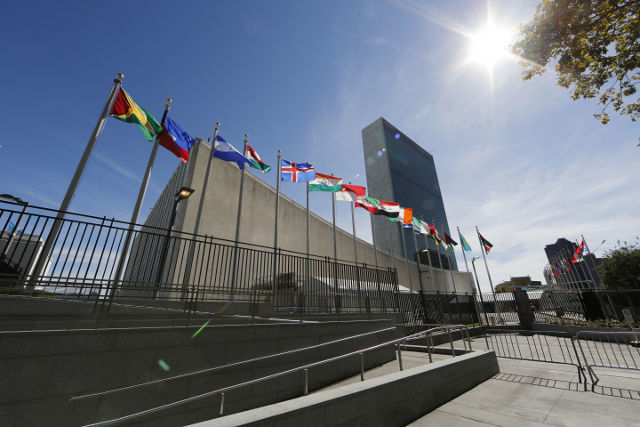 UNITED NATIONS, May 21 (APP):The United Nations envoy for Libya warned on Tuesday that the country was on the verge of descending into a full-scale civil war, as a renegade general from the east continued to try to capture the capital from the internationally-recognized government.

“Libya is on the verge of descending into a civil war, which could lead to the permanent division of the country,” UN envoy Ghassan Salame said in a blunt statement to the UN Security Council. “The damage already done will take years to mend, and that’s only if the war is ended now.”

The latest round of fighting began on April 4, when General Khalifa Haftar, who holds sway in the country’s east, moved his fighters on Tripoli, to the west, in a bid to take control of the capital from UN-backed Chairman of the Presidential Council and Prime Minister Fayez al-Serraj. A UN call for a Ramadan truce has failed to materialize.

The damage done to Libya, he said, would already take “years to mend” but “unless fighting around the capital Tripoli stops now, the country risks descending into a civil war which could lead to the permanent division of the country”.

Salame said grimly, that he had spent two years hoping to avoid having to deliver such a bleak in-person briefing to the Council, noting there were already 460 dead – 29 civilians – since the offensive began in early April. More than 2,400 had been injured, and 75,000 forced from their homes, the majority civilians, with half of the displaced women and children.

Violence began on the eve of an UN-backed National Conference planned to bring more than 150 representatives together from across the country, which had to be postponed. “There was great public excitement about what the conference could yield” said the top UN official, “in terms of a way forward to end Libya’s eight-year long period of transition” which threw him “into the deepest level of sadness for the opportunity lost”.

“I am no Cassandra,” he added, referencing the mythical Greek figure who uttered prophesies which nobody believed, “but the violence on the outskirts of Tripoli is just the start of a long and bloody war…imperilling the security of Libya’s immediate neighbours and the wider Mediterranean”.

Salame noted that in southern Libya, terrorist group Daesh, or ISIL, was flying its distinctive black flags, and reportedly had been responsible for four attacks, killing a total of 17, with more than 10 wounded, and eight others kidnapped, since Libya’s militias turned their guns on each other this year, not the common extremist threat.

“There are numerous reports of extremists, persons under international sanctions, and individuals wanted by the International Criminal Court appearing on the battlefield on all sides. All parties must publicly disassociate themselves from such elements without delay and refer to the ICC those for whom arrest warrants have been issued,” he said.

He bemoaned the flow of weapons back into the country noting “many countries” were providing arms to all sides. “Without a robust enforcement mechanism, the arms embargo into Libya will be come a cynical joke. Some nations are fuelling this bloody conflict; the United Nations should put an end to it”, he added.

Turning to the humanitarian needs, he said health facilities were struggling to cope, with 11 ambulances “directly hit” by airstrikes, rockets and shelling. “I am appalled by the apparent disregard for the due protection of personnel engaging in vital medical tasks”, he noted, expressing deep concern for the rise in abductions, disappearances and arbitrary arrests in the past six weeks.

He called on the Council’s “unequivocal support” in applying International Humanitarian Law.

Salame said despite scaling-down non-essential UN staff in Tripoli and Benghazi, “we remain in Libya alongside the Libyan people to deliver as best we can”, with over 42,000 receiving aid so far. He said through local democratic elections held since March 30, the people were showing their stoical resolve too, saying it was “vital to keep the pilot light of democracy alive”, and appealed for the Council’s support to “the municipal election process.”

“There is no military solution” he reiterated, “and it is high time for those who have harboured this illusion to open their eyes and adjust themselves to this reality. Libya’s mosaic of communities cannot be governed without alliances and relationships stretching across the whole country”. He said Libyans would need to adjust in light of the attempts to take Tripoli by force since April 4.

“A better future is still possible, but we all must be seized with the fierce urgency of now, while the front lines remain on the outskirts of Tripoli, and before the battle moves, God forbid, to the capital’s more densely populated neighbourhoods. This will require concerted and immediate action by the international community”.

He concluded with a call for the Council to act immediately, in support of politics over any military solution. “Full civil war in Libya is not inevitable. It may occur by the will of some parties, and by the inaction of others. I hear Libyans resigning themselves to a conflict of many months or even many years. My duty, and that of this family of nations, is to tell them: ‘No. You need to stop the fighting and stop it now, for the sake of your loved ones, for the sake of your country, and for the sake of international peace and security.’”