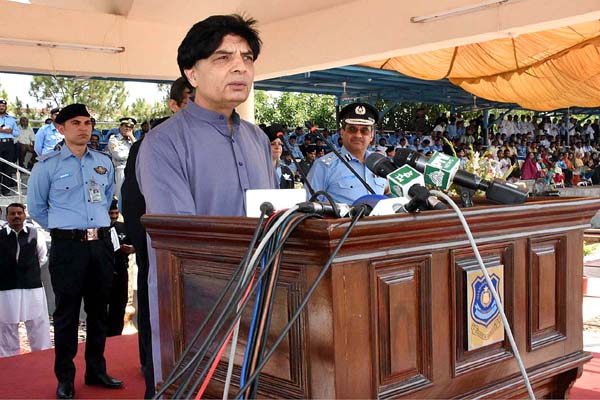 ISLAMABAD, Jun 6 (APP): Overall improvement in law and order situation and decline in terrorism has been witnessed during the last three years due to hard work of Law Enforcement Agencies (LEAs) of the country.

Interior Minister Ch. Nisar Ali Khan said this while addressing the passing out parade of recruits held in the Police Line Headquarters here on Monday.

Addressing the passing out parade, the minister said that overall security situation has improved in the country over the past three years and incidents of terrorism have come down. “The entire credit for this achievement goes to security and intelligence agencies of the country”, he mentioned.

The minister said that crime rate had declined in the capital city of Islamabad and also expressed his commitment to make it crime free city. Police personnel should play significant role in achieving this target besides ensuring positive change in policing affairs.

“I am happy that 480 recruits have appointed purely on merit. We have to ensure transparency and merit in recruitment process and the policy will be adopted in the appointment of personnal in Rapid Response Force (RRF)”, the Minister pledged.

The Interior Minister also inspected the passing out parade and was presented an honorary shield by the IGP Islamabad Tariq Masood Yasin.

The Minister also distributed the keys of vehicles among Frontier Constabulary (FC), FIA and Islamabad police which were provided by the Chinese government.