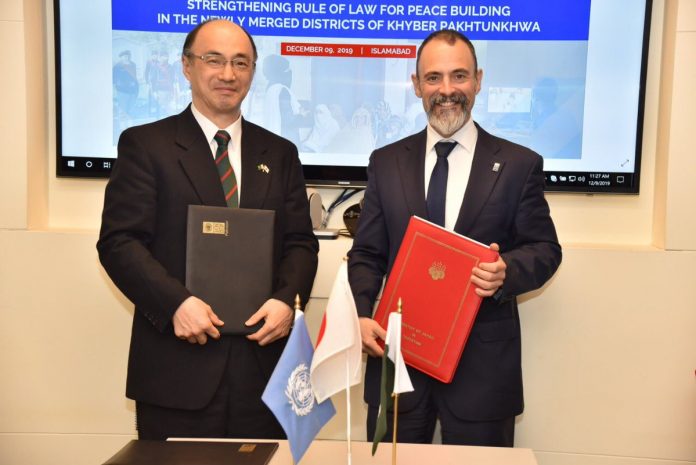 United Nations Development Programme (UNDP) and the Government of Japan have joined hands to provide support to Pakistan in building capacity of law enforcement agencies in the newly merged districts of Khyber-Pakhtunkhwa, said a press release here on Monday.

The main purpose of this agreement for the training of law enforcement personnel (Levies and Khasadars) to enhance their capacity to perform policing functions in the said areas.

United Nations Development Programme, through its Supporting Rule of Law for Peaceful, Just and Inclusive Societies Pakistan (Amn-o-Insaf) Programme, endeavors to strengthen both supply and demand sides of the rule of law and justice system.

The Programme has been working in close collaboration with the government, rule of law and justice institutions to improve delivery of services to people, particularly women and other marginalized communities.
Strengthening institutional capacity of the criminal justice actors like police, prosecution and courts is a key priority area of the Programme.

Speaking on the occasion, Charge d’ Affaires ad interim of Japan to Pakistan, Mr. Yusuke Shindo, in his speech mentioned, “Security is basis and precondition for any development effort of a country.”

He said the enforcement of laws is essential for the socio-economic development of any society because it ensures prevention of abuse of power by authorities and treats everyone equally without any injustice or discrimination.

Senior diplomat said that Strengthening the rule of law is one of the important pillars of Japan’s foreign policy and, therefore, Japan continues to contribute to the peaceful settlement based on law and regulation in various countries. We believe people of the world have the right to live in peace and not in fear or distress.

He further mentioned that Japan will continue to support Pakistan in the future as a friend and hoped that this project would further contribute to strengthen the existing bond of friendship between the two countries”.

Resident Representative, UNDP Pakistan Ignacio Artaza, stated, “Rule of law plays an essential role in promoting peaceful, just, and inclusive societies and its success is a pillar for the prosperous development of the merged Districts”.

The signing ceremony was held in Islamabad and attended by officials from the Embassy of Japan in Islamabad, Economic Affairs Division, Home and Tribal Affairs Department and Planning & Development Department Khyber Pakhtunkhwa.