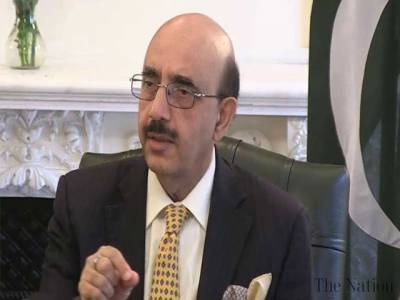 “India is neither a democratic nor secular state where minorities and non-Hindu people are being denied their right to live,” he added.

In a message released to the media on the eve of India’s so-called Republic Day on Sunday, the AJK president said the freedom loving people across the world particularly the people of Pakistan and Kashmir were observing black day to expose India’s hegemonic and fanatic designs, particularly the oppressive face of the Indian government, ruling Bharatia Janata Party, and its ally RSS.

Sardar Masood Khan pointed out that when the Modi regime attempted to impose its fascism on the Indian Muslims and other minorities, the whole of India had risen up against the BJP and the RSS, and thus the extremist Narendra Modi paved the way for Kashmir-like uprising in the length and cranny of his own country.

The state president strongly condemned the unlawful Indian actions of August 5, 2019. “We convey to India to lift its occupation of Kashmir, pull back its occupation troops, end the siege and grant right of self-determination to the Kashmir people,” he said and added that the occupied territory had neither been the part of India nor will it happen in future.

Sardar Masood Khan said the Indian rulers and military chiefs must stop threatening to wage war on Azad Kashmir and Pakistan, otherwise, the brunt of even minor mistake would have to be borne by coming generations.

“Today is certainly the blackest day because the people of occupied Kashmir are faced with the Indian brutalities and barbarity,” he added.

The AJK president called upon the international community particularly the United Nations to move forward, and instead of relying on hollow statements, take concrete steps to prevent ethnic cleansing of the Kashmiri people.

He also paid glowing tributes to the detained Hurriyat leaders and hundreds of thousands of Kashmiri people for offering resistance and sacrifices amidst Indian brutalities.