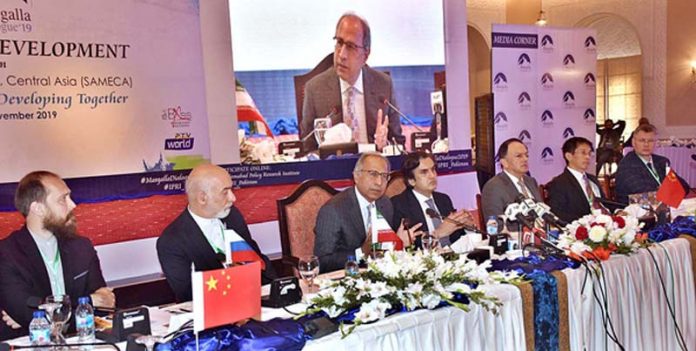 ISLAMABAD, Nov 14 (APP):Adviser to the Prime Minister on Finance Dr Abdul Hafeez Sheikh on Thursday said the government had been investing in human resource which would lead the country towards sustainable economic growth.

“No country in the world can achieve high development agenda until they would have equipped their people with modern skills, innovation and technology to enhance their capability to contribute in the development and prosperity of their country,” he said while addressing “Margalla Dialogue ’19 on Peace and Development in South Asia, Middle East, Central Asia (SAMECA) here.

The adviser said education, skills, and tendency towards innovation and modern education was playing a vital role in the development of society.

He viewed that the private sector had to play a major role in the development and prosperity of the country, while the public sector could only give it support and opportunities.

He said around $ 100 billion development funds were available for the private sector and the Asian Infrastructural Investment Bank (AIIB) would be the main supporter in that regard.

“I see opportunities everywhere in every sector of Pakistan which needs to be exploited,” he said and invited foreign investors here to invest for jobs creation.

Talking about peace in Afghanistan, he said Pakistan wanted peace in the neighboring country to enhance connectivity in the region. Prime Minister Imran Khan had met Afghan President Ashraf Ghani to the peace process.

He said Pakistan played an important role to normalize relations between Iran and Saudi Arabia.

He said Pakistan was playing an active role for increasing connectivity among the regional states, which would help increase trade and investment in the region.

As regards the economic achievements, he said the current government had focused on economic stability, which would lead towards economic growth. The current account deficit had decreased by 40 percent, with considerable decline in the fiscal deficit, he added.

He said the World Bank in its Ease of Doing Business Report 2019 placed Pakistan among the world’s top 10 countries and sixth in Asia for introducing business reforms.

“We introduced a liberal policy to provide equal opportunities to every country to trade with and enhance cooperation in all sectors of economy,” he said.

Hafeez said Pakistan had taken the lead in enhancing trade ties between member states of SAMECA region, primarily through projects focused on energy.

“CASA 1000 project targets to import upto 1,000 MWs of electricity from Tajikistan and Kyrgyz Republic, he added.

The US$ 7.5bn Turkmenistan-Afghanistan-Pakistan-India (TAPI) pipeline project, he said, was another landmark project in the region.

He said a new oil refinery costing $ 10 billion was being set up in the Gwadar Port by Saudi Arabia.

He said connectivity between the people of SAMECA member countries was not up to the mark, which need to be increased.

He said the regional countries needed to revisit the visa regimes, besides increasing the people-to-people connectivity. Currently, the visa regimes in most SAMECA member states were highly restrictive, he said.

He proposed that the Schengen visa regime similar to the European Union (EU) needed to be adopted and a common visa regime was being initiated in some Central Asian states.

This ‘Silk Visa’ would be a welcome step forward as it would enable foreigners with a valid visa from either country to travel in both countries, he added

Hafeez said the 2019 Passport Index ranking showed that the SAMECA states were classified as some of the least welcoming countries.

He said the South Asia and the Central Asia had the lowest intra-regional trade (less than 5%: Source WB) compared to all other regions (East Asia 35%, EU 59%: Source IMF)

He added that intra-regional investment flows were even less than trade in goods and services, and trade with South Asia accounted for only 1.7% of Central Asia’s total trade.

Bottlenecks to greater connectivity were physical infrastructure constraints with no rail links and few operational border crossing, he added.

The BRI, he said, was a project with estimated investment of over US$ 26 trillion in critical infrastructure roads, railways, ports and energy.

He said the China Pakistan Economic Corridor (CPEC) was one of the key trade routes that would connect China to the Middle East and Africa.

Under CPEC around US$ 62 billion of new investments were targeted in energy and integrated transport corridors, he added.

The adviser said in April 2019, Pakistan announced a new visa policy aiming at encouraging tourism and facilitate trade and commerce. Under the new policy, visitors from 48 countries, including 13 states from the SAMECA region, would receive visa on arrival.

He said e-visa service had also been introduced and visitors from 175 countries could apply for visa online without having to submit papers at the embassy.

Hafeez said business visa was now available to 96 countries, which also included most of the SAMECA countries.

He said Pakistan was fast-tracking investments on road and railways for trade connectivity.