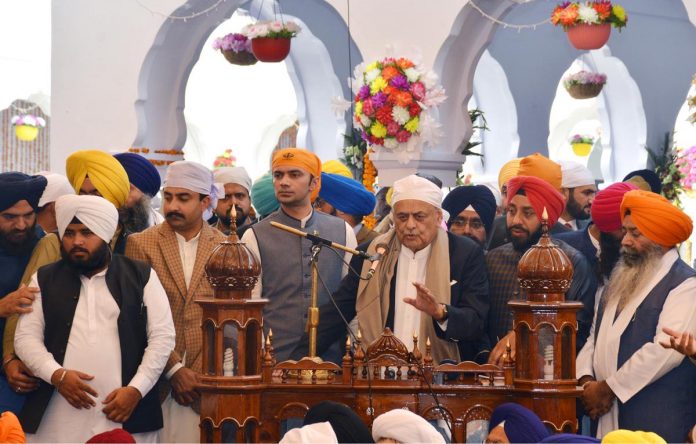 Addressing a ceremony to mark 550th birth anniversary of Baba Guru Nanka Devji at the Gurdwara Janam Asthan here, he said peace was the hallmark of Baba Guru Nanak’s teachings and his message is the Oneness of God, adding that Baba Guru Nanak preached love and not hatred.

The minsiter said the government wanted to do a lot more for Yatrees, but could not deliver due to restrictions by the Indian government.

He said Pakistan was committed to development of Kartarpur and Nankana Sahib in the coming years as two cities were of historical significance. He said that Nankana Sahib was given the status of district with a view to strengthen linkages with the Sikh community in Amritsar, adding, the idea was that the Sikhs could visit Nankana Sahib and return to Amritsar the same day.

The minister said the government was issuing multiple visas to the Sikh pilgrims, adding that a committee had been constituted so that the lacunae could be removed.

He said the shortcomings would be overcome so that better arrangements could be made for the Sikh pilgrims when they come the next year.

He said the wish of people to establish Baba Guru Nanak University in Nankana Sahib had been fulfilled.

The minsiter said Prime Minsiter Imran Khan laid the foundation stone of Baba Guru Nanak University, which would be completed in three years time with a cost of Rs 7 billion. A chair will be dedicated to Baba Guru Nanak at the university.