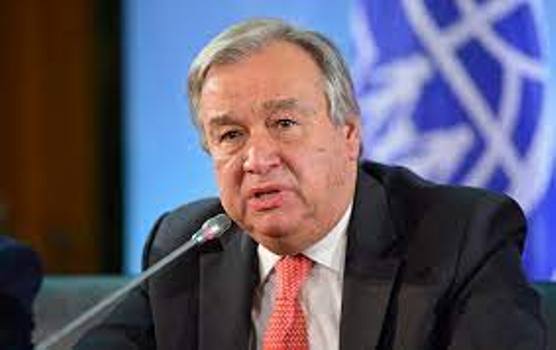 UNITED NATIONS, Oct 11 (APP):United Nations Secretary-General Antonio Guterres Monday made an urgent appeal to the international community to inject cash into Afghanistan’s economy to avoid collapse, warning that the world will pay a heavy price if timely action is not taken.

Speaking to reporters, he said the Afghan economy was breaking down, with assets frozen and development aid paused compounded by closing of banks and essential services, such as healthcare, suspended in many places.

“We need to find ways to make the economy breathe again,” the UN chief said adding that this could be done without violating international laws or compromising principles. “We must seek ways to create the conditions that would allow Afghan professionals and civil servants to continue working to serve the Afghan population,” the secretary-general said.

“I urge the world to take action and inject liquidity into the Afghan economy to avoid collapse,” he said, while stressing, in response to questions, the urgency of cash infusion so that the people don’t suffer.

In this regard, he said that the question of recognition of the Taliban government, sanctions , terrorism and other issues are separate matters. At the same time, Guterres strongly appealed to the Taliban to keep their promises to women and girls and fulfill their obligations under international human rights and humanitarian law.

‘Women and girls need to be the centre of attention, he said, adding, “Their ability to learn, work, own assets, and to live with rights and dignity will define progress”. ‘Without them, there is no way the Afghan economy and society will recover,” the UN chief emphasized.

He gave details of the aid distributed by UN agencies across Afghanistan where at least 18 million people — half of the country’s population — are afflicted. “Humanitarian assistance saves lives.

But it will not solve the problem if the economy of Afghanistan collapses,’ the secretary-general said while giving details of aid delivered in the month of September alone.

“UN agencies and humanitarian NGOs in Afghanistan are in a race against time to deliver life-saving aid to crisis-affected people and pre-position supplies ahead of winter,” he said. “They won’t let up.

“They have been acting with the cooperation of the Taliban, who have progressively granted access to the areas requested and provided security when needed. The number of incidents during humanitarian operations has been in constant decline.”

Already before the Taliban takeover in August, the UN chief pointed out that Afghanistan’s fragile economy — which has been kept afloat by foreign aid over the past twenty years — suffered from the impact of drought and COVID. “If we do not act and help Afghans weather this storm, and do it soon, not only they but all the world will pay a heavy price,” the secretary-general said.

“Without food, without jobs, without their rights protected, we will see more and more Afghans fleeing their homes in search of a better life, he said, underlining that flow of illicit drugs, criminal and terrorist networks would increase. “This will not only badly affect Afghanistan itself, but also the region and the rest of the world.”