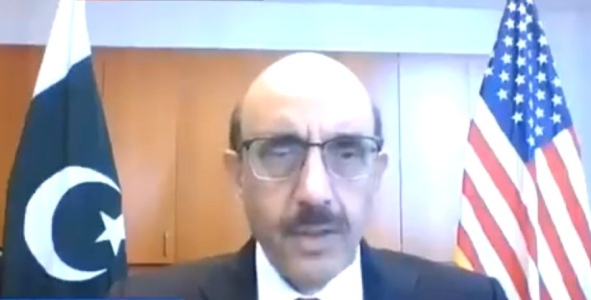 WASHINGTON, Sep 13 (APP): With the flood situation in Pakistan becoming increasingly menacing, Ambassador Masood Khan has urged the world community to step up their help to enable Islamabad cope with the climate-induced disaster that has left behind a trail of destruction.

“Since these floods are a direct consequence of deadly climate change, we would hope that the international community, particularly the developed countries and the United Nations, will step forward to give climate support to Pakistan,” he said in an interview with TRT, a Turkish broadcaster, adding that the cumulative damage of climate change would be astronomical.

“It is a very difficult situation; we have disasters within the mega disaster; we have water-borne diseases, displaced people, with crops and cattle destroyed,” the Ambassador said.

Noting that UN Secretary-General Antonio Guterres had put the estimated cost for the total loss and damages at more than $30 billion, he said, while Pakistanis have resorted to their resourcefulness to cope with the calamity, “We can’t do it alone and therefore appealed to the international community to help us.”

Masood Khan thanked the UN chief for his visit to Pakistan and President Recep Tayyip Erdogan for leading the effort to mobilize Turkish government and society to support the affected Pakistani people, the Ambassador said that while they (Pakistanis) have resorted to their resourcefulness to cope with the disaster, “We can’t do it alone and, therefore, appealed to the international community to help us.”

Pakistan, he said, was vulnerable even before the floods as it was facing food insecurity issues due to situation in Ukraine. “We were trying to scramble our economy towards viability and we were succeeding. But now there is this huge disruption.”

Recounting huge damages incurred to infrastructure in the submerged areas, Masood Khan said that Pakistan would have to invest heavily in recovery, rehabilitation and reconstruction of the affected areas.

To deal with any such calamities in future, the Ambassador said construction sector needed to be regulated along with instituting a better system for conservation of water resources. Better planning for the growing population would be needed while formulating a future strategy for disaster resilience, he added.