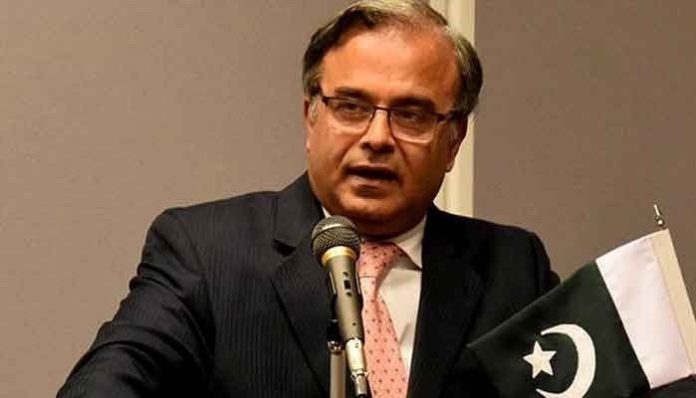 WASHINGTON, Nov 24 (APP):Pakistan looks forward to continue working with the United States (US) and other international partners to avert a humanitarian crisis in Afghanistan and restore peace and stability to that war-torn country and the region, Ambassador Asad Majeed Khan has said.

The ambassador made that statement during an interactive session with a group of undergraduate students from George Washington University at the Pakistani embassy on Tuesday during which he briefed them on Pakistan’s history,

culture and society as well as its foreign policy including Islamabad-Washington ties.

On Pakistan-US relations, he said that Pakistan has strong economic, cultural and educational linkages with the US.

Since its creation, Pakistan has remained close friend and partner of the US, Ambassador Khan said,

adding that the both countries have achieved some of the most important successes in the global geo-political arena in the last 74 years.

The Pakistani envoy told students that US-Pakistan partnership still continues with the aim to bring peace and stability in Afghanistan and the region. After the US withdrawal from Afghanistan,

he said Pakistan has facilitated a safe passage to thousands of people wishing to leave Afghanistan, and looking forward to continue working to prevent a humanitarian disaster in that country.

Ambassador Khan said that Pakistan was a peace-loving country which desired friendly relations with all states, especially its neighbours.

Unfortunately, he said, India’s unilateral and illegal actions in Indian Illegally Occupied Jammu & Kashmir (IIOJ&K) on 5 August 2019 and the continuing human rights violations of innocent people of IIOJ&K have vitiated the strategic environment in South Asia.

Pakistan, he told the students, was a proud inheritor of some of the oldest civilizations including Mehargarh civilization (7000 BCE to 5500 BCE), Indus Valley civilization (5000 BCE) and Gandhara Civilization (1400 BCE to 800 BCE).

He also apprised the students of the topographical and cultural diversity of Pakistan.
The Ambassador’s remarks were followed by a question and answer session.

The students conveyed deep appreciation for the opportunity to learn about Pakistan and expressed their gratitude for a very informative session with the Ambassador.