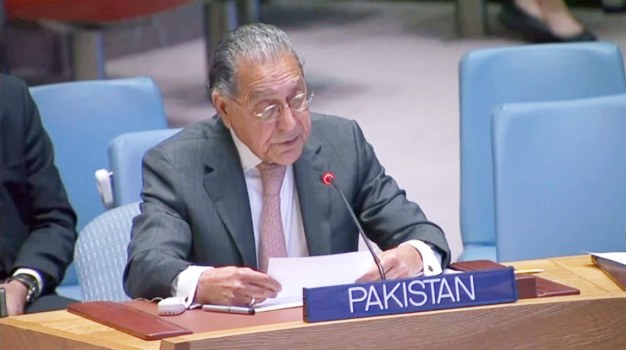 UNITED NATIONS, Sep 28 (APP): Expressing “serious” concern over terrorism originating from Afghanistan, Pakistan Tuesday called on the Taliban to prevent the Afghan territory from being utilized for attacks by terrorist groups, such as Tehrik-e-Taliban Pakistan (TTP), against neighbours or any other country.

“In particular,” Ambassador Munir Akram told the UN Security Council, “eliminating the threat posed by ISIL-K that is Da’esh, the TTP, ETIM (East Turkestan Islamic Movement) and IMU (Islamic Movement of Uzbekistan), as well as Al-Qaeda and other terrorist groups, is of vital importance for Pakistan.”

Speaking in the 15-member Council’s debate on the situation in Afghanistan, the Pakistani envoy said the recent rise in high profile targeted killings and bombings, including against the Russian embassy is a cause for “special concern.”

“Should we fail to provide the necessary and continued long-term economic solutions to the Afghan people and to the authorities in Kabul, there is a risk of anti-Taliban groups, particularly ISIL-K (Da’esh)gaining further strength in the country,” he warned.

“We expect the Taliban to prevent Afghanistan’s territory from being utilized for terrorism against neighbours or any other country,” Ambassador Akram, adding that Pakistan will support all sincere efforts to neutralize and eliminate these terrorist groups while fully respecting Afghanistan’s sovereignty and territorial integrity.

But, Ambassador Akram said, the role of spoilers — an apparent reference to India — who wish to aid and abet terrorism against Pakistan from Afghan soil must also be checked and the terrorist networks they have established must be eliminated in Afghanistan and the region, as Islamabad has a vital stake in peace and stability of the neighbouring country.

Pakistan, he said, would like to see an Afghanistan that is at peace with itself and the world, and which respects and nurtures all its citizens, without regard to gender, ethnicity and religion.

“A peaceful, prosperous and connected Afghanistan is in our collective interest,” the Pakistani envoy said, pointing out that Pakistan has led the humanitarian efforts to help Afghan brothers and sisters in their present situation.

The Pakistani envoy urged the international community to respond positively to the UN Secretary-General’s appeal for $4.2 billion in humanitarian and economic assistance to Afghanistan and release the country’s financial reserves, held by the United States, to revive its banking system.

The early resumption of reconstruction activities and implementation of regional connectivity projects with central Asia, as well as the extension of the China-Pakistan Economic Corridor (CPEC) to Afghanistan can provide a pathway to economic growth and stabilization in the country. However, it requires funds and financial stability. Afghanistan’s frozen national reserves should be released and channelled through Afghan institution; doing so can contribute to reviving the Afghan economy and its banking system. However, without this, trade cannot take place, nor can investment be expected.

“In the absence of such conditions, Afghanistan shall continue to remain on external life support and in constant danger of economic collapse,” Ambassador Akram warned.

The countries of the Organization of Islamic Cooperation (OIC), including Pakistan, he said, remain engaged through conversation between the Taliban and delegations of Islamic scholars and Ulema to find ways and means to address questions of Sharia and its interpretation, particularly with a view to facilitating education prospects for Afghan women and girls.

Meanwhile, he said, Afghan girls in refugee camps in Pakistan are going to school and colleges and many Afghans are sending their daughters to attend school in Pakistan.

He stressed that the Security Council, international community and UNAMA (UN Assistance Mission in Afghanistan) to develop a workable roadmap and objectives they seek with respect to human rights, inclusivity and counterterrorism. The much-maligned Doha Agreement for Bringing Peace to Afghanistan and the relevant resolutions adopted by the Council since then contain elements which can provide such a roadmap towards normalcy in Afghanistan.

“Similarly,” he said, “counter-narcotics efforts by the Taliban are at risk of getting reversed in the absence of alternate means of supporting livelihoods”.