LONDON, Sep 16 (APP): High Commissioner Moazzam Ahmad Khan on Thursday stressed that Pakistan, as a country most affected by decades-long instability in Afghanistan, had a vital stake in peace and stability in that country.

Pakistan not only continued to host over 4 million Afghan refugees, but had also suffered 80,000 casualties and economic losses of $ 150 billion due to conflict in that country, he added.

In his address to the Commonwealth Foreign Ministers, the High Commissioner shared Pakistan’s perspective on the situation in Afghanistan, and the role being played by Pakistan in supporting evacuation and humanitarian relief efforts, a press issued by Pakistan High Commission in London said.

The High Commissioner underscored that today, there was finally an opportunity to put an end to the 40-year war in that country and enable the Afghan people to reconcile and rebuild.

The humanitarian situation posed a challenge. Afghanistan stood on the brink of a catastrophe with 18 million Afghans in dire need of assistance. At the same time it was imperative that Afghan soil was not used to harm any country.

He called on the international community to avoid the mistake of abandoning Afghanistan, adopt a pragmatic approach, and sustain engagement. At this critical juncture, the Afghan nation must be helped to walk firmly along the path of peace, progress and prosperity.

He called on the Commonwealth to play its role in outlawing wilful provocations and incitement to hate and violence.

High Commissioner Moazzam Ahmad Khan also apprised the forum of Pakistan’s position on issues on the Commonwealth agenda, including climate change, trade and combating the pandemic.

The Commonwealth Foreign Ministers meet annually to take stock of the organizational agenda and follow up on decisions of the highest Commonwealth forum, the Commonwealth Heads of Government Meeting (CHOGM).

Rwanda is due to host the next CHOGM session next year. 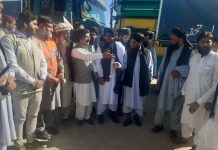