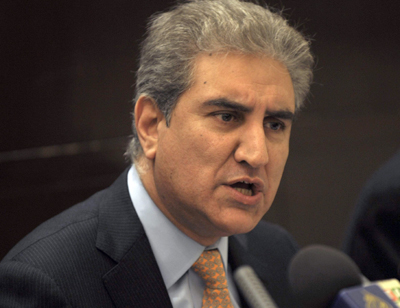 ISLAMABAD, Sep 20 (APP)::Foreign Minister Shah Mehmood Qureshi on Thursday expressed gratitude to Saudi Arabia and the United Arab Emirates for extending hospitality during the official visit to Prime Minister Imran Khan.
Foreign Minister Qureshi, who accompanied the prime minister during his trip, on his return back home took to Twitter and shared his sentiments in a series of tweets.
The foreign minister in particular thanked Saudi King Salman bin Abdulaziz Al Saud for providing the delegation an opportunity to enter Kaaba and Roza-e-Rasool (SAW).
“I would like to thank the Custodian of the Two Holy Mosques King Salman for honouring us with the opportunity to enter the Roza-e-Rasool (SAW) and Khana Kaaba and offer our nawafil at Bab-e-Tauba. There could be no greater honour,” he said.
Qureshi said he was looking forward to meet his counterpart at the sidelines of UN General Assembly session later this month.
“Our relationship has a strong foundation rooted in decades of mutual understanding, support and cooperation. I look forward to picking up on my discussions with Foreign Minister Adel Aljubeir at the UNGA,” he said.
The foreign minister thanked Crown Prince of Abu Dhabi Muhamad bin Zayed Al Nahyan for the traditional Emirati hospitality and said UAE had a special place in the hearts of Pakistanis.
“Not only is the UAE an important trade and investment partner for us, but also has a special place in the hearts of the people of Pakistan and second home to Pakistan Cricket,” he wrote in his tweet.