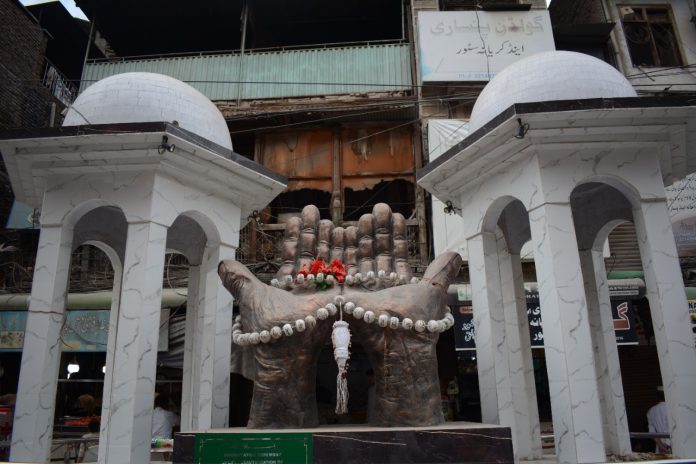 Located in the heart of Peshawar City near historical Chowk Yadgar, Ghanta Ghar and Balahisar fort, the Qissa Khwani Bazaar remained a key trade and cultural center where international merchants of subcontinent, Afghanistan and Central Asia stayed at nights and shared tales of love, culture, art and architecture, music and traditions before their departure to respective destinations.

The Bazaar starts from Kabuli Gate that takes only eight to 10 minutes to reach after disembarking from BRT station of Khyber Bazaar and takes tourists to primordial age after witnessing its centuries-old architectural buildings, artisans’ shops, food restaurants and primitive Qehwa Khanas.

During its peak period, the bazaar served as a campground for trade caravans of merchants from Delhi, Amritsar, Lahore, Kabul, Dushanbe, Ashgabat and Tashkent who used to enter the city’s gates to unload their merchandise.

The bazaar has witnessed the vigor of great warriors, invaders and kings including Alexander the Great, Mehmood Ghaznvi, Zaheeruddin Babar, Nadir Shah, Ahmed Shah Durrani and his grandson Shah Zaman who marched through famous Khyber Pass during their invasions of India.Qissa Khwani’s history is believed to be as old as the history of Peshawar,” said Noor Khan, Incharge Peshawar Museum while talking to APP.

“The recent archaeology excavation at ancient Gor Khatri had established the city’s historical profile declaring Peshawar as ‘Oldest Living City’ in South Asia with primitive history going back to about 539 BC.” Noor said Gor Khatri excavation was the deepest and biggest in the world which revealed that the 20-layers of soil provide a complete profile of this ancient city ranging from British to pre Indo-Greek era.

Thus, the unique tradition of storytelling and drinking of Qehwa became an integral part of Qissa Khwani culture, which is still continuing despite the passage of  centuries. Tourists can also take glimpses of ancestral houses of Bollywood super stars including Yousaf Khan alias Dalip Kumar at Mohallah Khudadad, Haveli of Raj Kapoor’s father Prithvi Raj and residence of Shah Rukh Khan’s family at Shah Wali Qatal.

“Peshawar’s Qissa Khwani and Dilip Kumar sahib are inseparable,” Faud Ishaq, former President Sarhad Chamber of Commerce and Industry (SCCI) and nephew of the Peshawar born India’s cinema legend Dilip Kumar told APP.
He said Dilip Kumar’s love for Peshawar could be judged from his will in which he wished to use his ancestral house for welfare of Peshawarities.

Dilip Kumar visited Peshawar in 1988 and 1998 where he was welcomed by hundreds of thousands of his fans at Qissa Khawani. “Dilip Sahib wished to see his ancestral house when he came to Peshawar in 1998. So we selected to visit his house between 1:30am to 2:00am (midnight) but could not reach it due to presence of hundreds of thousands of his fans who arrived at Qissa Khwani to see a few glimpses of the hero of Mughal e Azam film,” Faud Ishaq recalled.

The Havali of Raj Kapoor’s father Prithvi Raj, who moved to Mumbai in 1930 where he prevailed over South Asian’s film industry both as an actor and producer, thereby laying the first Bollywood dynasty spanned about four generations, were also attracting visitors at Dhaki Nalbandi near Qissa Khwani.

The house of Taj Muhammad Khan, father of Bollywood legend Shah Rukh Khan was located at Shah Wali Katal Qissa Khawani where his celebrated son had good time with his family members during his teenage visit to Pakistan, Shah Rukh’s house is also  a source of attraction for tourists and his cinema fans.

Besides, the arched white marble monument erected in the middle of the bazaar to honor all those martyred in the Qissa Khwani massacre by British troops in 1930, also remained the centre of attractions for many. British Commissioner of Peshawar, Herbert Edwards had great love for Qissa Khwani who called it the ‘Piccadilly of South Asia’. During colonial rule, Britishers used informers to know public opinion over administrative decisions by instructing them to visit city areas and bring `Qissa Khawani Gazzattee’.

Qissa Khwani had witnessed a sharp decrease in arrival of tourists during 2001-13 when terrorists targeted this cultural hub of Peshawar that claimed so many precious lives including Senior Minister Bashir Ahmed Bilour in 2012 and CCPO Malik Muhammad Saad Shaheed in 2007.

“The terror attacks and later corona lockdowns had an adverse effect on Qehwa business and cultural activities besides affecting Qehwa business at Qissa Khwani,” Fazal said.

“In spite of economic losses, we continued our business even in those days when people were afraid to visit this ancient market,” said Fazlur Rehman. “Making Qehwa is my passion which I inherited from my father in 1970.

Majority of the visitors ask for green tea ‘Qahwa’ while many request for green tea with milk locally Known as ‘Sheen Da Payo’ a special tea item of Qisakhwani” he said. Qehwa maker said an increase in tourists’ arrival has been witnessed at Qissa Khwani after lifting of corona restrictions in recent past, making positive impact on Qehwa business, adding domestic travelers from Punjab, Swat, Chitral, Nowshera and Dir Upper were being seen in substantial numbers these days. “I came from Khewra Punjab to enjoy Chapal Kabab along with traditional Qehwa at Qisa Khwani bazaar,” Khurshid Alam, Assistant Manager Pakistan Mineral Development Corporation told this agency.

“My visit to Peshawar remains incomplete without visiting this historic street for Chappli Kabab and Peshawari Qehwa,” he said. “Qisa Khwani is the identity of Peshawar and solid efforts are required to preserve its cultural heritage, architecture, artwork and substantial revenue could be generated by maintaining its beauty and primitive heritage,” said Shaukat Ali Khan, Chairman Central Organization for Traders KP.

He said about Rs 42,000 per 50 KG are being spent on import of green tea mostly from Vietnam and this amount could be saved by facilitating investors and farmers to cultivate green tea in upper KP especially in Malakand and Hazara division. He urged the Government to give special financial incentives to investors for purchase of machinery for tea cultivation and harvesting and face uplift of Qissa Khwani.

Latif ur Rehman, Spokesperson KP Tourism Department told APP that PTI Government had completed ‘Cultural Heritage Trail” project in 2018 in Peshawar under which 500 meters long trail from ancient Ghanta Ghar to Gor Khatri and outlook of 85 heritage buildings including famous Sethi House at Mohalla  Sethian were renovated and preserved. Starting at historical Ghanta Ghar, the trail passes through ancient Mohallah Sethian with a number of beautiful houses constructed by Sethi family back in the 1880s that were preserved, attracting tourists and architectural lovers in droves.

A proposal is under consideration for the face uplift of Qissa Khawani to restore its centuries old outlook for apprising new generations about the historical past of bazar when it remained hub of commerce between Subcontinent and Central Asia.