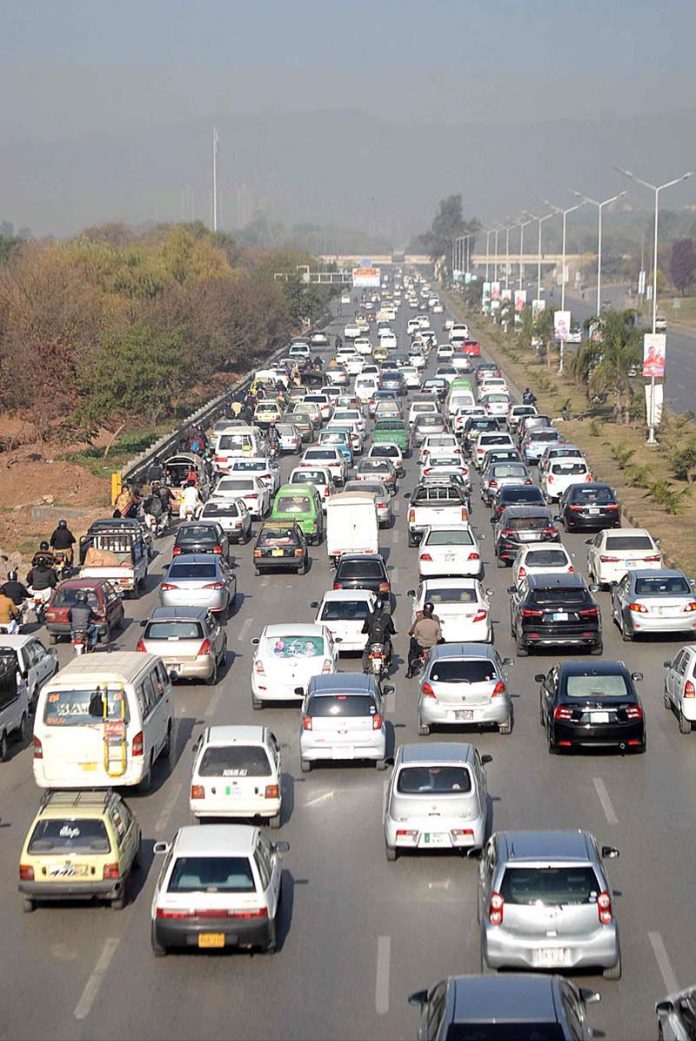 ISLAMABAD, Jan 16 (APP): Changing moods with growing impatience, haste, arrogance and carelessness have badly affected traffic system in the capital. Despite widening of main arteries and efforts for efficient policing, the situation is not showing much improvement.

Blowing horns where prohibited, parking vehicle at ‘No Parking’ sign, cutting others way, ignoring lanes, violating signals and attending mobile phone calls in center of the road are general tendencies, we have developed with the passage of time.

Over speeding, wrong overtaking and snaking through heavy rushes often result in serious accidents. This situation needs an early attention of authorities before the federal capital is hit by a total traffic mess.

A few motorists care for others’ rights as majority has its own rules and priorities when on road. More often it seems that traffic code has become some forgotten or obsolete dogma for them. The serene generation is phasing out and an anxious and hasty generation is replacing it which is direly needed to be taught of revered traditions and customs.

A driver, when asked, termed this tendency, an outcome of a peculiar mental approach, meant for personal satisfaction.

“Mostly, people feel pride in violating rules. They know that they can manage, if stopped on violation,” was a comment by a saner commuter, Adnan Ahmed. “Why we tend to violate laws for personal satisfaction. Why we are going far off the ethics.”

From a road side view, it seems as we are least acquainted to traffic code. No matter exceptions are always there, but these exceptions are overwhelmed by the majority violators.

“We have five lane road on each side, even then traffic situation is pathetic,” said another motorist, Dilshad Ahmed about Islamabad Expressway. “For me, it is not an issue of space but better trafficking. We need strict legislation and its implementation.”

Taxi and private vehicles drivers and bikers of our age have developed into the most careless generation. Moving on snail pace, suddenly taking turns, applying brakes anywhere to pick a passenger and cutting others way is their peculiar style of driving.

Like many, most of the time they are arrogant and ready to brawl, telling others to “mind their own business” when advised to drive carefully.

Women and elderly have their own mood to drive. They permanently keep driving dead slow in the fast lane. Even horns and flash light from behind make no difference for them. This situation compels the followers, to overtake wrongly.

“Mind your own business and do not teach us rules’ is a common reply we receive when ask anybody to abide by rules,” said Muhammad Saleem, a businessman. “So, we have no other option than to keep silent. But, this silence either on our or authorities part is spoiling our overall social fiber,” he said.

In recent years bikers have gone more unruly than anybody else. Snaking through vehicles on a packed road and zigzagging discriminately in all lanes even when the vehicles are moving on a faster pace, is their peculiar mindset. They are often seen crossing cars and jeeps in the fast lane least bothering about their and others safety.

Jaywalkers are also men of their moods. They seldom cross road from zebra crossing or overhead bridges. “Let other save them and not they themselves,” is the philosophy behind their beeline flight from one side of road to the other.

Chatting and listening mobile phone calls in the driving seat, is another mood and more dangerous as it results sometimes in lethal accidents.

“We need effective implementation of traffic laws. In many countries traffic moves smoothly even on roads narrower than ours,” said Muhammad Rauf, an expatriate Pakistani. “When in Dubai or London, we fully abide by their laws, but when here, we feel free to violate laws.”

Seeing from all angles, it seems a matter of training, legislation and implementation and our law makers and police have a major role to play to tame unruly drivers.

But, police have their own compulsions. Continuous duties, overwhelming traffic load and insufficient deployment are their common irritating problems.

“Should I shoot him if he is irking other commuters,” was a sharp comment by one ITP official when his attention was invited towards continuous lane violation by a loader truck driver. His comment was not shocking as he was deployed to manage traffic at Gulberg Greens interchange – the most difficult place in capital in terms of guarding traffic.

When he was questioned about this attitude, his reply was simple. “Please stay here for a while and see what people are doing. After all we are also human beings. We penalize violators. But, people should also show responsibility.” He sought patronage from top administration to make the people fully abide by laws.

Senior Superintendent of Police Rai Mazhar was not available to comment on the situation despite repeatedly attempts.

This situation is eye opening and clearly calls for effective implementation of laws before the saner road users also go unruly. Motorists must be imparted necessary education and those on duty must have full patronage of top administration.