Following successful holding of the cantonment boards (CB) elections across the country including KP, the electorates have pinned high hopes from the newly elected representatives of political parties and independent candidates for speedy resolutions of their basic problems including pavement of streets, sanitation, drinking water, street lighting, cleanliness and other services.

“Water sewerage, encroachment and quick disposal of waste are among the major problems being faced by residents of Peshawar cantonment and the newly elected representatives are expected to deliver as per the expectations of masses,” said Farman Khan, owner of Abbas Tower in Peshawar cantonment told APP.

“Earlier, we had to visit cantonment board offices for resolution of our basic problems, which required substantial time and official procedures for execution and approval of projects,” he said.

Expressing satisfaction over the overwhelming majority of PTI candidates in cantonment boards’ polls in Pakistan especially in KP, he said like the PTI Government in the Khyber Pakthunkhwa, the elected representatives of the party would also deliver and swiftly address problems of the residents of the cantonment boards.

Great enthusiasm was witnessed among workers of all political parties including PTI, PML-N, PPP, Jamaat-i-Islami, ANP and independents during CB elections.

According to sources in the provincial election commission, PTI had clinched maximum seats against other religio-political parties in KP during the said elections. In KP, PTI had clinched 15 seats, nine by independent candidates, four by PMLN, 3 PPP and 2 by ANP.

Out of 37 total wards in nine cantonment boards in KP, election was held in 33 wards as four candidates including two each from Charat and Murree Galis Abbottabad cantonments have already been elected unopposed.

PTI had won four seats in Abbottabad, three in Risalpur, two each in Nowshera and DI Khan and one each in Kohat, Bannu and Havalian. Similarly, PMLN clinched three seats in Abbottabad and one at Havalian. PPP bagged two seats at Peshawar and one seat at Abbottabad while ANP secured victory on one seat at Peshawar and Mardan cantonments. Two independent candidates elected each from Kohat and Nowshera, one each from Peshawar, Mardan and Bannu cantonments.

In KP, a total of 169 candidates have contested elections on general seats in seven districts of the province where election was peacefully conducted in 33 wards. A total of 131 polling stations and 402 polling booths were setup for 122,940 registered voters.

Sharifullah Khan, Provincial Election Commissioner KP thanked the provincial government, police, district administration, others law enforcement organizations, cantonment board officers and officials of Ministry of Defense for extended full cooperation for smooth holding of the CB elections in the province.

He also appreciated the voters for exercising their right of franchise in substantial numbers in a peaceful atmosphere and dignified manner.

Provincial Minister for Agriculture Mohibullah Khan told APP that the overwhelming success of PTI candidates in KP has testified to the highest popularity of the party and strong roots in the province.

He said people of KP have again rejected the negative politics and hollow slogans of the opponent political parties and again gave a clear mandate to PTI for resolution of their problems and putting the country on roads to progress and development.

From the result of these CB elections, he said one can easily predict that the PTI under the leadership of Prime Minister Imran Khan would easily form the next government for a third consecutive term in KP as well as in the country. 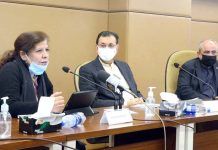