QUETTA, Aug 14 (APP): On the occasion of August 14, 75 Independence Day of Pakistan, a magnificent and flag-hoisting ceremony was organized at Quaid-e-Azam’s Residency in Ziarat.

In the ceremony, the students of the school presented songs, tableaus, and speeches regarding importance of Independence Day of Pakistan.

Addressing the ceremony, Deputy Commissioner Ziarat Habib Naseer said that today was the day of renewal of pledge for unity.

He said the nation of Pakistan was a unique nation in the world.

“If this nation is united, no nation in the world can defeat it,” he said.

He said that Allama Muhammad Iqbal had a dream to build this country which Quaid-i-Azam Muhammad Ali Jinnah made it a reality.

“Today we should also pledge to develop Pakistan. Therefore, work together day and night and make Pakistan an invincible country,”he said.

Speaking at the program, Divisional Director Akhtar Khetran said that Pakistan was a bouquet of different nations.

At the end of the program, Deputy Commissioner Ziarat Habib Naseer also distributed prizes among the position holders. 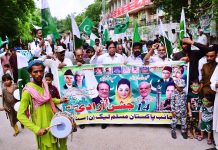