PESHAWAR, Aug 15 (APP): Minister for Health Khyber Pakhtunkhwa, Taimur Saleem Jhagra on Monday said the government was committed to eradicating polio virus from the region and underlined the need for tailored strategies to cater to ground challenges.

Jhagra said that reporting of polio cases in the province is a wakeup call that needs remedial measures on war footing, adding that programme managers should encourage district teams to highlight real issues and challenges including fake finger marking and missed children.

Earlier, speaking to the forum, Chief Secretary Khyber Pakhtunkhwa, Shahzad Bangash thanked technical partners and all line departments specially Army and police for their sacrifices and all out support for the national cause of polio eradication.

He said that multiple challenges were being confronted in curbing virus spread in the province, adding the government was determined to overcome these challenges and would succeed in achieving the goal.

The CS appreciated approach in the southern districts of province saying that it should continue and strongly recommended disciplinary action against poor performers across the board along with real time data reflecting the true picture of missed children.

Earlier, Additional Secretary Health (Polio), Asif Raheem gave detailed presentation on the readiness status of the August campaign, saying that the campaign has been prepared in the province in view of virus isolation from the environmental sites in Nowshera, Swat, Peshawar and Bannu districts.

He said that fake finger marking, missed children and low routine immunization coverage was the biggest programme challenges and also shared details of action taken to curb virus spread in the province.

Sharing modality of the campaign, he said that the fIPV plus OPV campaign would be carried out in Bannu, Lakki Marwat, North Waziristan, DI Khan, Tank and South Waziristan wherein a total of 1,058,067 children under the age of five would be vaccinated with oral polio vaccine including 994,583 kids, who would be administered fractional dose of inactivated polio vaccine (fIPV), to boost their immunity against polio and stop virus circulation in environment”, the meeting was informed.

A total of 3016 trained teams have been constituted to administer fIPV to children at the outreach centers whereas 5221 teams were formed for administration of Oral Polio Vaccine, he added.

He said that the second phase of the campaign will be carried out in 29 districts wherein more than 6.2 million children will be immunized against polio for which a total of 25485 teams have been established out of which 22810 were mobile teams, 1631 fixed, 933 transit teams and 111 were roaming teams.

Earlier, Minister for Health Taimur Jhagra and Chief Secretary KP, Shahzad Bangash administered polio drops to the children while vaccinator administered fIPV to the eligible children to kick start the August round of campaign in the province. 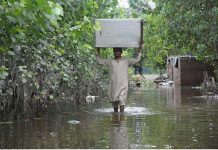 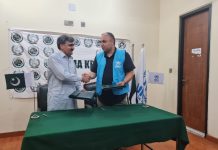 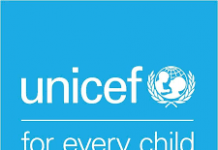 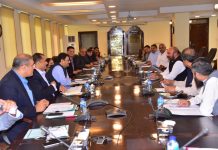