Addressing the ‘Breast Cancer Awareness Seminar’ here at Governor House, she said that breast cancer was becoming an alarming issue of the world including Pakistan, adding that it was need of the hour to create massive awareness among the people about this fatal disease so that it should not be taken as a stigma or social taboo of reluctance to discuss this disease with anyone.

Begum Samina Arif Alvi also stressed the need for sensitizing the society about breast cancer so as to control this fatal disease. She maintained that breast cancer can only be controlled substantially through massive awareness among people.

Breast cancer’s early diagnosis having 98 per cent chance of full recovery, she informed.

For the self-examination for breast cancer, she added, they can get breast cancer informative videos available on the internet. “Healthy woman guarantees healthy society,” she highlighted.

She suggested the women to take self-examination randomly for breast cancer before going to mammography, which was very costly and not affordable for every woman.

The First Lady said that in the past, women above 50 years of age were vulnerable to breast cancer but it was astonishing to note that today young girls and even the males were suffering from this disease, adding that in Pakistan, every eighth woman had breast cancer. She said according to a senior doctor, one woman was diagnosed with breast cancer after every 15 minutes.

She said that the awareness regarding breast cancer campaign had geared up all over Pakistan during last three years and now people have started realizing that breast cancer was not a social stigma but a fatal disease.

Samina Arif Alvi added that she herself was actively leading this campaign and urged the women to ensure their active role in sensitizing the society in this regard.

The First Lady said that Pakistani society also needed to pay more attention towards people with different abilities by taking most care of this stratum to empower them and to make them useful citizen. Around 12 to 15 per cent of country’s population consisted of differently able persons.

About women empowerment, she mentioned that various banks and institutions were providing soft loans to women and to persons with different abilities for various purposes including starting home-based businesses. She added that there was also a dire need to create awareness among the women about this facility being provided by the Pakistan Tehreek-e-Insaf (PTI) government.

In her address, Begum Perveen Sarwar, the wife of Punjab Governor said that breast cancer awareness seminars were also being conducted in various educational institutes of the province to raise awareness among young girls regarding preventions, early diagnoses and treatment of the disease. She added that there was dire need to teach young girls and women about self-examination that could play a vital role in tamely diagnosis.

She maintained that awareness seminars were very important and helpful in removing the taboo about breast cancer.

Begum Perveen Sarwar said there should be no hesitation in talking about a disease that claims over 40,000 deaths every year in the country. “Early detection can save the people.”she concluded. 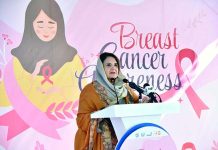 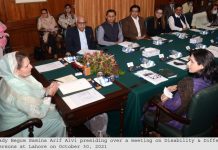 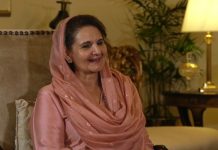 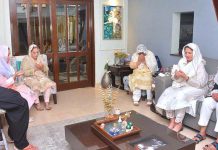 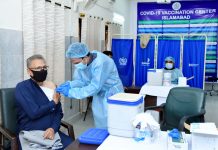 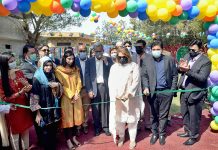 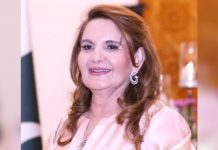 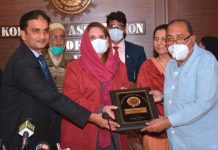