RAWALPINDI, Jan 05 (APP):Chairman of the Parliamentary Committee on Kashmir Shehryar Khan Afridi Wednesday called upon the United Nations General Assembly to request an advisory opinion of the International Court of Justice to characterize the Kashmir situation as an uncompleted decolonialization process and to recognize the legal force of the Security Council’s resolution calling for a plebiscite of the people of Kashmir so that the occupied people of Kashmir determine their own future.

Speaking at an event held to commemorate the adoption of the United Nations Commission on India and Pakistan (UNCIP) Resolution on the accession of the Kashmir to either Pakistan or India through a free and impartial plebiscite, Afridi said just like the United Nations intervened and found that Britain had not properly completed the decolonialization process in Chagos Archipelago in the 1960s, it could offer a similar intervention vis-à-vis Kashmir.

“United Nations is responsible to intervene now as India is committing war crimes in Jammu and Kashmir,” Mr Afridi said while addressing the audience at the event organised by the Institute of Regional Studies (IRS) here on the occasion of Right to Self Determination Day being observed by the people of Jammu and Kashmir. Citing news reports by International media organisations, Afridi said that India is imposing severe restrictions on press freedom and committing gross human rights violations, including war crimes, mass rapes and other crimes against humanity in the Indian Illegally Occupied Jammu and Kashmir.

“From the allegations we have heard, these crimes seem to meet the definition of genocide. Demographic changes are being made to turn Muslim-majority Kashmir into Hindu-majority state. This calls for UN intervention now,” he added. Afridi said that based on the evidence presented by area experts, the Kashmir issue should arguably be seen within a broader global context of settler colonialism, genocide, and crimes against humanity.

“Serious accusations of genocide, crimes against humanity, rape as a weapon of war, unlawful arrests and mass blinding have been made. This is just the beginning of a long, arduous, and judicious process to uncover truth, but the live testimony we have heard thus far, and the reports and evidence we have seen, have left us with serious concerns about crimes, which appear to have been carried out on a massive scale,” he said.

He said that Kashmir is disputed territory, a fact established by 18 United Nations resolutions and it cannot be claimed legitimately by any country or claimed as an integral part until the time that the people of Kashmir have been granted the right to freely, and without fear, express their opinion in the referendum that they were promised and that the UN continues to urge. “To date, that has not happened. Kashmir is not a secessionist movement.

In fact, we heard convincing evidence that the people of Kashmir have been involved in a long struggle of freedom from foreign rulers. Kashmir is among the most heavily militarized areas on the planet, with upwards of 700,000 to 900,000 Indian soldiers, paramilitary forces, and private security forces present,” he added. He said that IIOJK has been a story of tyranny, oppression, and siege. He called for greater involvement of the youth through interactive sessions in universities to counter the influence of the hybrid warfare waged against Pakistan by India through social media.

Senior Vice President of Kashmir Youth Alliance Mr Taha Muneeb emphasized that Kashmiris had never accepted Indian occupation and no amount of development expenditure of the Indian government in Kashmir could change that. He added that the freedom struggle in Kashmir was indigenous and had produced several well-known Kashmiri freedom fighters.

Mr Muneeb shared that 171 Kashmiris had been martyred by the Indian security forces in the year 2021 out of which 37 were martyred in December alone. President IRS Ambassador Nadeem Riyaz highlighted the importance of observance of special days related to Kashmir like January 5 when the UNCIP adopted the resolution for free and impartial plebiscite for self-determination of the Kashmiris. 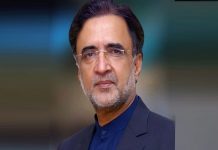