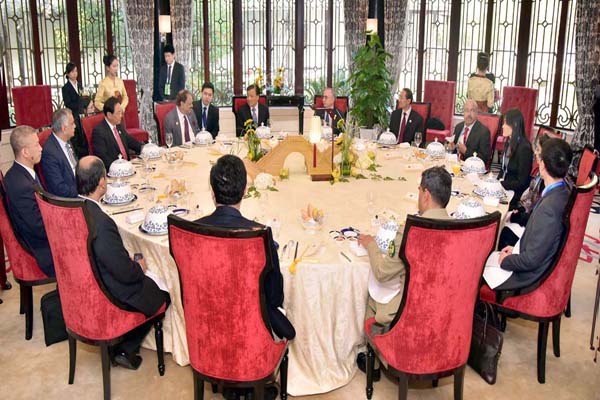 WUZHEN, China, Dec 16 (APP): Liu Yunshan, a high-ranking leader of the Communist Party of China (CPC) and member of the Standing Committee of CPC’s Central Political Bureau hosted lunch in honour of President Mamnoon Hussain and his delegation here on Wednesday.

Liu Ynshan hosted lunch for President Mamnoon Hussain on behalf of President Xi Jinping after the opening ceremony of 2nd World Internet Conference being held in this scenic town of China’s Zhejiang province.

The CPC leader on this occasion said Pakistan and China enjoyed all-weather, all-round and iron friendship, adding, people of China had special affiliation for the people of Pakistan.

He appreciated the President for raising in the Internet Conference the issue of cyberspace security, particularly its abuse by terrorists and criminals.

The President said during the meeting with President Xi Jinping on the sideline of the Conference he had very useful discussion on various matters of mutual interest.