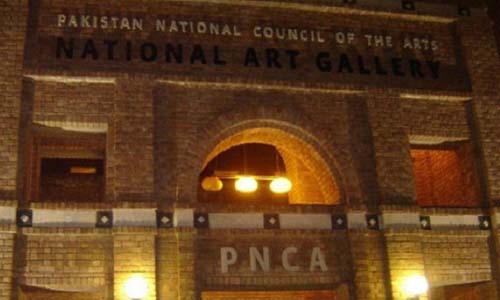 ISLAMABAD, Feb 10 (APP):An exhibition of exquisite calligraphic art by master artists was concluded here Sunday at Pakistan National Council of the Arts (PNCA) featuring stunning collection for art lovers of the federal capital.
Around 100 calligraphies were part of the show by the artists from Iran and Pakistan capturing similarities of art in Iran and Pakistan. The event was organized by the Cultural Consulate of Embassy of Iran in collaboration with PNCA to mark the 40th Anniversary of the Glorious Victory of Islamic Revolution of Iran.
Besides display of exquisite Iranian calligraphy, artists from Iran and Pakistan also conducted a 2-day calligraphy workshop to create the understanding of the similarities of calligraphic techniques among the young and up-coming artists.
These artists included master Calligrapher Rasheed Butt, Elahi Baksh Matee and Nasir Seemab from Pakistan and Ahmed Ali Barooti (Calligrapher), Ehsan Muhammed Pour (Designer) from Iran.
Iranian calligraphy is the most revered arts throughout history of Iran and it is one of the most eye catching and fascinating manifestations of Iranian culture in post-Islam period.
Iran has played the most significant role in the evolution of calligraphy. A national feature of Iranian Muslims has been known as the perseverance in learning to write beautifully. To Iranians, it meant the manifesting point of human spirituality where a pure writing was regarded as originated from a pure heart.
This exhibition will play vital role towards understanding the
art and culture being practiced in Iran and help strengthen existing
friendly ties between Pakistan and Iran, both the nations have rich heritage and cultural traditions with intellectual treasure and inspirational legacies, said Director General PNCA, Jamal Shah about the show.
Art is an international language and has no boundaries. It is
an excellent tool to curb negativity prevailing in our surrounding and
also an effective instrument to enhance diplomatic and cordial ties
amongst different nations of the world, he said, adding, calligraphy is an expression of art that brings people closer to each other and all countries respect the art of calligraphy. Ideas of peace can be promoted through this art and this exhibition was an important event that will bring positive results.