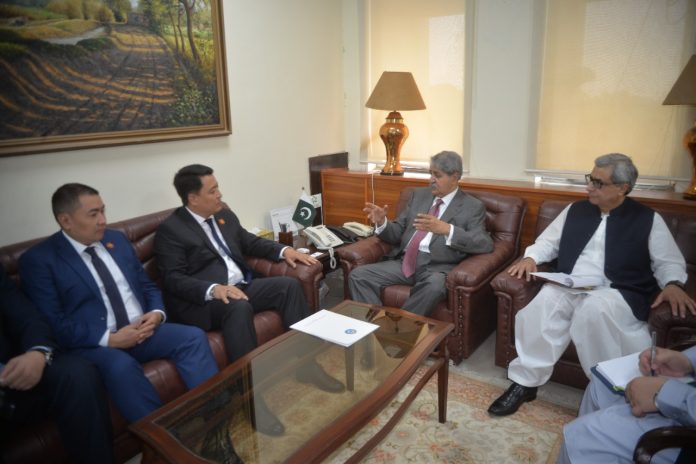 Deputy Minister of Foreign Affairs of Kyrgyzstan, Aibek Artykbaev on Friday called on Federal Minister for Commerce and Investment, Syed Naveed Qamar, said a press release issued here.
During the meeting, both sides discussed ways and means on increasing trade volume between the two countries and enhancing cooperation in other areas of mutual interest.

The meeting which was held in the Minister’s Office was attended by Special Secretary Commerce Dr. Ahmed Mujtaba Memon and Additional Secretary, Syed Hamad Ali.
During the meeting, both sides discussed ways and means on increasing trade volume between the two countries and enhancing cooperation in other areas of mutual interest.

The minister said that promoting international trade, transit and investment is the pivot around which Pakistan seeks to devise its economic policies.
Naveed Qamar expressed stated that government’s vision is to make Pakistan a trade, transit and transshipment hub ensuring connectivity with Afghanistan and beyond.

In this regard, Pakistan have signed transit trade agreement with Uzbekistan, and are negotiating Transit Trade Agreement with Kazakhstan and Tajikistan, he added.
Bilateral trade between Pakistan and Kyrgyzstan remained at US$ 4.27 million during fiscal year 2021-22 which does not reflect the true potential of trade between the two countries, the minister opined.

Commerce minister said that Pak-Kyrgyzstan trade and Investment Forum was held from, April 19-20 2022 in Islamabad and April 22nd in Lahore and desired that such activities should be held on regular basis in future.
Syed Naveed Qamar maintained that the draft MoU on establishment of Joint Working Group has been shared with Kyrgyz republic and their response was awaited.

The Kyrgyz Deputy Foreign Minister assured the Pakistani side for further enhancing trade ties between the two countries and said that he would take practical measures in this regard. 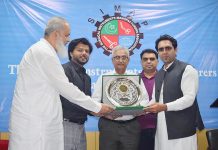