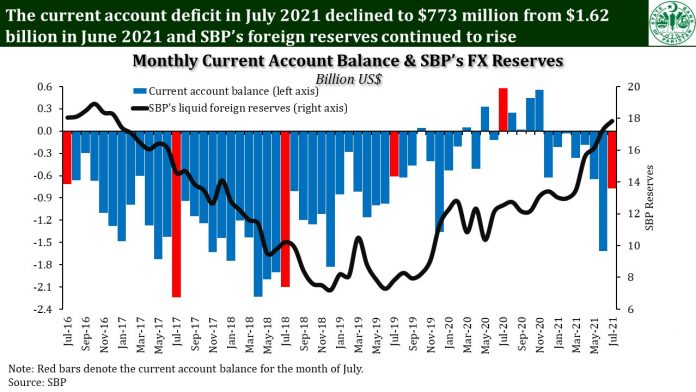 “This deficit is in line with SBP’s expectations of a current account deficit of 2-3 percent of Gross Domestic Product (GDP) as economic activity continued to progress,” the State Bank of Pakistan (SBP) said on its official twitter account.

It added that despite the recent increase in current account deficit, the SBP’s foreign reserves position continued to strengthen on monthly basis.
“This is in contrast to past trends and is supported by country’s market-based exchange rate system,” the Central Bank added.

According to the data released by the SBP, exports of goods and services were higher compared to July 2020 as they rose to $2.74 billion in July 2021 from $2.34 billion in same month of last year.

The increase in current account deficit was mainly attributed to higher imports during the month. However some of the major imports were seasonal such as COVID vaccine or heavy machinery to be used in industrial units in the country.

The level of current account deficit is not only lower compared to that in the previous government but its nature is also different from the past when the deficits were driven by an unsustainable consumption boom. Whereas in FY21, imports of capital, such as machinery made more of a contribution to the import bill, which bodes well for future growth.

A current account deficit is normal for a country like Pakistan where saving is low and which is undergoing a growth recovery. Two things are important that it not be too large, and that the country is able to finance it without losing foreign exchange reserves reserves.
Pakistan’s market-based exchange rate system introduced since June 2019 will help ensure the current account does not become unsustainable like in the past.

This mechanism did not exist in the past. Instead, the exchange rate was kept at an artificial level, such that the current account deficit kept growing and precious foreign exchange reserves were depleted to pay for imports and the country was forced to go to the International Monetary Fund (IMF).

At over $17 billion, Pakistan’s foreign exchange reserves have risen to a 4.5 year high in June. They rose by $5.2 billion during FY21. Conversely, during FY17 and FY18, they fell by $2 billion and $6.4 billion, respectively.

The data showed that the CAD without official transfers expanded to $827 million compared to the surplus of $565 million in same period of last year.
In addition, the trade deficit in goods expanded from $1.672 billion in July 2020 to $3.14 billion in July this year.

As a percentage of gross domestic product (GDP), the current account balance witnessed a deficit of 2.8% in July 2021 as opposed to deficit of 2.4% in the same period of last year. 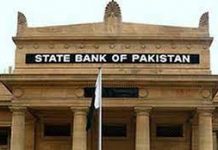 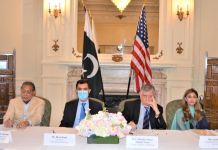 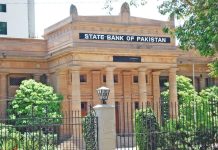 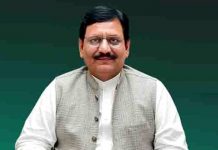