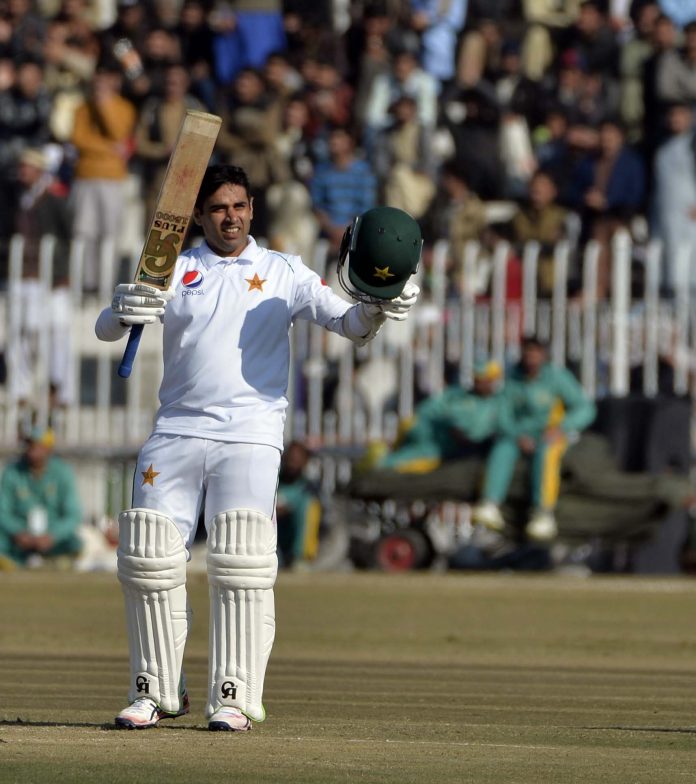 RAWALPINDI, Dec 15 (APP):Pakistan’s Abid Ali created history as he became the first player to score centuries on both his One Day International and Test debuts in the first Test of the two-match series between Pakistan and Sri Lanka that ended in a draw at Pindi Cricket Stadium, Rawalpindi on Sunday.

The 32-year-old, who had scored 112 against Australia in his first ODI in March, this year, proved his class with an unbeaten 109. Besides him Babar Azam (102) and Sri Lanka’s Dhananjaya de Silva (102) were the two other batsmen, who scored hundreds in Rawalpindi Test.

The tourists, who had resumed their innings from 286-6 added another 22 runs in 5.1 overs to declare their innings on 308-6. Earlier, rain had washed out the majority of days three and four.

Abid scored unbeaten 109 off 201 ball with the help of 11 boundaries, while Babar Azam faced 150 balls for his 102 undefeated runs. Abid and Babar shared unbroken 162-run stands before the match ended in a draw.

Pakistan’s start was not encouraging as opener Shan Masood departed for a duck as he hit a full toss from Kasun Rajitha straight to mid-off. Skipper Azhar Ali scored 36 off 86 balls before handing over catch to Karunaratne on the bowling Lahiru Kumar. However, before getting out he added 87 for the second wicket with Abid.

Abid, who was declared man-of-the-match played with calm, but Babar seemed in aggressive mode.

The teams are scheduled to fly to Karachi to face each other in the second Test.

Speaking about his performance, Abid said he was not relaxed and his plan was to see off the new ball. “That was the target. I gradually built the inning with plans for every five overs. I tried to keep that up. When I was in 90s Babar gave me confidence,” he said.

He felicitated Abid for scoring hundred on his debut and said every team member had tried to deliver. “The good thing is that I spent time in the middle. I’ll try to build on that in the next Test match,” he added.

He said Pakistan pacers were showing their skills. “The good thing is that they are capable of picking up wickets.”

He said playing at home was altogether a different experience. “I’m really thankful to the crowd. They (spectators) came here today despite knowing that there would be no result. As bowlers and batsmen we did not get this sort of support for the past nine to ten years.”

Sri Lankan captain Dimuth Karunaratne said his team had really done a good job. He lauded Dhananjaya for scoring a superb hundred. He was also full of praise for his fast bowlers saying that they did well.

He said Kasun Rajitha bowled only six over as he was injured. “I believe we need to see our positives and move on. Hopefully, it won’t rain in Karachi and we get five days of cricket.”

He also thanked Pakistan fans stating that they also supported his team. “In other countries you won’t get such support. We went out last evening, and everyone was really humble with us. We love the Pakistan fans and hope we get the support in Karachi as well.”