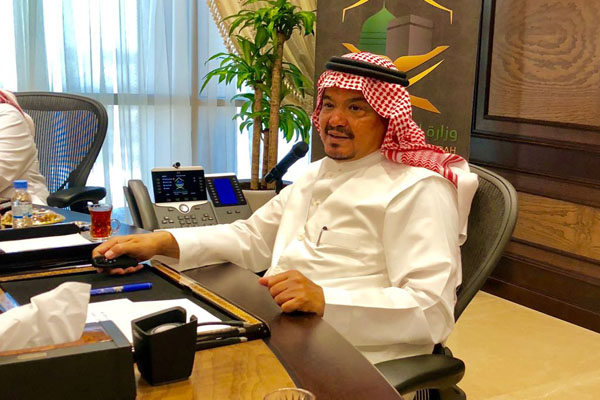 MAKKAH MUKARAMAH, July 31 (APP)::Saudi Minister for Hajj and Umrah Dr Muhammad Saleh Bin Thahir Tuesday said collective efforts were underway to increase the number of Hajj pilgrims under the Vision-2030 by ensuring maximum facilities to Hujjaj and carrying out massive development projects at the Harmain Sharifain.
In an interaction with a delegation of foreign media here, the minister said more than three million pilgrims from across the world would perform Hajj this year. “This demands a very well-coordinated degree of responsiveness.”
The delegation comprising senior journalists from different Islamic countries is currently on a visit to the Kingdom to witness pre-Hajj arrangements being made by the Saudi government.
He said the kingdom and the custodian of the two Holy Mosques have the honor to host these pilgrims, adding that around three million pilgrims as routine visit Saudi Arabia to perform Umrah every year.
Dr Saleh said “We are bringing even more big developments costing $ 30 billion to host increasing number of pilgrims every year, which necessitates enhanced facilities and services.”
Elaborating development projects, the minister informed that Harmain Train project that encompasses Makkah Mukaramah, Medina Munawarah and Jeddah, would be a biggest ever addition in the transportation services for pilgrims, along with road network, buses and other means of communication.
This, he said, would save travel time and energy of pilgrims simultaneously. Moreover, a new airport in Jeddah that costs USD 35.0 million is also another dedicated service, he added.
Another demanding development relates to ‘housing project’ in which more than 500 residential units would be constructed, he said, adding this will help in accommodation management plan during the Hajj season.
Makkah’s current population is six million will eventually be added to the number of three million pilgrims during Hajj. This mighty mass will be managed by the government in a very systematic and technical ways this year.
The minister said “We are making Hajj and Umrah a ‘zero worry journey. If you lost your luggage, need health care or meet an accident, all these problems will be immediately solved,” he added.
‘Global Muslim Village’ will be a stunning project, reflecting culture of every Muslim country. “The Kingdom has a special project to build Global Muslim Village, at about 40 kilometers from Makkah,” he added.
The minister informed that Muslim Ummah around the world would establish their cultural sites at this place. They would also sell their own products, such as handicrafts etc. There will be a metro service connecting this place to other sites and cities in next two to three years.
To a question by media persons, Dr Saleh informed that synchronized technological practices would be observed in shape of using smart communication technology.
Referring to modern smart phones and allied technology, he said “we are also attaching smart techniques to harmonize pilgrims. By 2030, Hajj will be facilitated with complete modern technology.”
Responding to another question, the minister reaffirmed full resolve of the Kingdom to ensure maximum facilities for the pilgrims with a highest possible degree of responsiveness in health, security, transportation and accommodation.
“We are making Hajj journey for all Muslims as comfortable as possible by creating an environment and atmosphere so that they will not feel themselves at strange place. They are doing Hajj not making a tour. When pilgrims are here and performing Hajj, they have hotline call with Allah,” he concluded.

WHO urges mask use where physical distancing is difficult