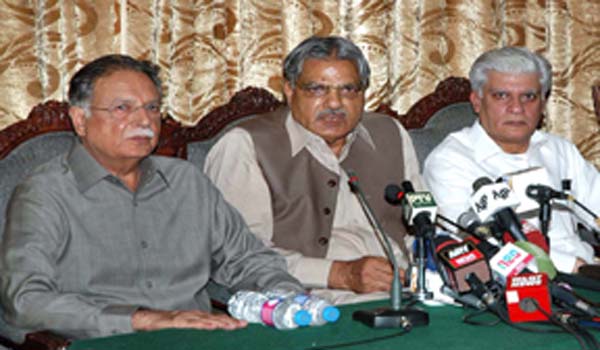 Addressing a press conference along with Minister for
Information, Broadcasting and National Heritage Senator Pervaiz
Rashid and Special Assistant to Prime Minister on Political Affairs
Dr Asif Kirmani, he said modern hospitals would be established in
every district of the AJK valley.

While existing hospitals would be upgraded, equipping them with
modern facilities to extend maximum facilities to the suffering
humanity, he added.

The minister said trauma centers will be established in every
district of the valley, adding that AJK would be provided five air
ambulances for lifting of the patients in emergency cases.

He said a parliamentary committee would be set up to address
the issue of Mangla Dam affected people, making it clear that the body’s recommendations would be implemented in letter and spirit according to the instructions of the prime minister.

Barjees said the Mirpur-Muzaffarabad expressway would be
completed by end of the fiscal year 2016-17.

He said work on the Leepa Valley Tunnel would be started in
the year 2016-17.

The minister said on directives of Punjab Chief Shahbaz
Sharif, Kahuta- Azad Pattan road would be completed at a cost of Rs
one billion in a year to facilitate commuters and motorists.
The PML-N government, he said, had already initiated different
development projects worth Rs 35 billion in the valley.

As per directives of Prime Minister Muhammad Nawaz Sharif, he
said the Kashmir Council’s budget was passed in Muzaffarabad instead
of Islamabad. Besides, Rs 2.5 billion have been allocated for
constructing a building for the AJK Parliament, he added.

He also announced measures for beautification of the AJK
capital Muzaffarabad.

Barjees said 3G and 4G services would be started in AJK by
September this year.

Answering a question, he expressed confidence that load-
shedding would be overcome by 2018, saying that the government was
following an effective strategy and it succeeded in curtailing the
loadshedding duration from 22 hours to six-eight hours a day.
He said uninterrupted supply of electricity and natural gas
was being ensured to industrial sector after signing of agreement
with Qatar for import of LNG.

Replying to another question, he said, the PML-N twice had an
opportunity to bring no confidence motion against the present AJK
government, but the party did not go for it and preferred to bring
change through vote.

Barjees said the federal government gave development funds
amounting to billions of rupees but the AJK government failed to
initiate even a single mega project.

“The present AJK government befooled the common man in five
years and now the time has come for its accountability,” he
remarked.

Minister for Information Broadcasting and National Heritage
Pervaiz Rashid said the time of AJK elections had arrived and the
Pakistan Muslim League-Nawaz (PML-N) had finalized a dynamic
manifesto for progress and prosperity of the valley.

“If we will be given a chance, we will be duty-bound to
implement the manifesto,” the minister said.

He said that Prime Minister Muhammad Nawaz Sharif had a
special affiliation with the people of Kashmir and wanted to see the
valley progressing and flourishing.

“The PML-N will carry out and complete the announced mega
development projects after wining the upcoming elections in Azad
Jammu and Kashmir,” he said.

Pervaiz Rashid said it was the track record of the PML-N that
it always fulfilled the promises made with the people of Pakistan and
vowed that the party would continue with the same spirit in AJK.

“Forming the government for the third time is evident of the
fact that the PML-N always stands by its commitments and fulfills
promises made with people of the country,” he remarked.

Answering a question, the minister said the PML-N received 220
applications for 29 seats in different parts of AJK, while other
political parties failed to get a matching response.

He expressed confidence that the PML-N would win the AJK
elections with a thumping majority and form its government.
Replying to another question, he said the corrupt elements
would be brought to justice and corruption would be stopped.
“The public hold the politicians accountable through vote
in elections,” he added.