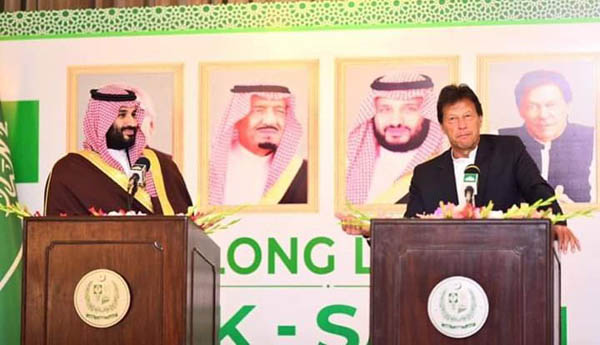 ISLAMABAD, Feb 18 (APP):Prime Minister Imran Khan Monday expressed his gratitude to Saudi Crown Prince Mohammad bin Salman for issuing prompt directives for the release of about 2,000 Pakistanis jailed in Saudi Arabia.
In a statement prior to departure of Crown Prince Mohammad bin Salman at Nur Khan Air Base, he said he felt immense pleasure over Crown Prince’s remarks in which he had declared himself ‘as ambassador of Pakistan in Saudi Arabia’.
The prime minister terming the directive as ‘generous’ for setting about 2,000 Pakistani prisoners free, thanked him on behalf of the people of Pakistan.
He said these people had been working in Saudi Arabia due to lack of employment opportunities in Pakistan.
He, during a dinner reception hosted in the PM House on Sunday night in honour of the Crown Prince, had raised the issue of Pakistani prisoners in Saudi jails and requested his highness for a sympathetic consideration of the issue.
The prime minister also expressed his satisfaction over the growing partnership between the two countries in diverse fields and said the memorandums of understanding inked last evening were reflection of the same.
He said the bilateral relations for the first time had been evolving into other sectors. “It’s just the beginning,” he added.
He told the Crown Prince to always consider Pakistan as his second home.
The prime minister in a light vein further said if the Crown Prince contested elections in Pakistan, he would get more votes than him (prime minister) as he was more popular in Pakistan.
Crown Prince Mohammad bin Salman, in his remarks, said they strongly believed in the bright future of Pakistan which was set to become the largest economy in the world by 2030 having the highest gross domestic product growth rate.
He also expressed his satisfaction over the growing relationship between the leadership of two brotherly countries.
About the cooperation in different fields, he said it was just the beginning which would be followed by more development projects in the future.