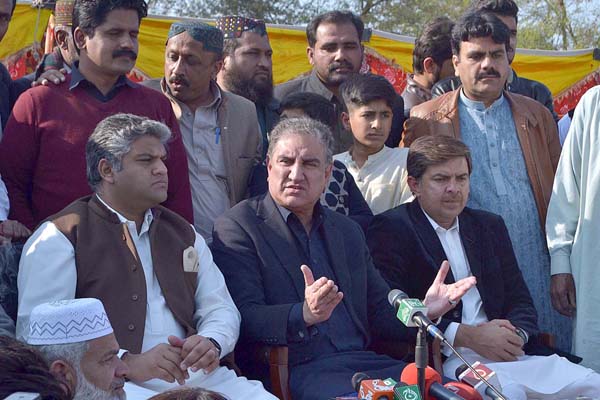 MULTAN, Feb 2 (APP)::Foreign Minister Makhdoom Shah Mehmood Qureshi said here on Saturday that Pakistan would  ready to work with next Indian government in case it want to work with Pakistan.

Talking to the media, he said that elections in India was her internal matter and Pakistan had neither interfere  in its internal matters nor it intends to do so. Although, issues are emerging in India but Pakistan has no role in  this regard, he added.

Qureshi said that Kashmir dispute needed to be resolved, adding that Pakistan, India and Kashmiris were three  important identities in this regard. He said that he had an exchange of views with Kashmiri leader Mirwaiz  Umar Farooq but India should not make it an issue.

“We want to resolve Kashmir dispute through dialogue but the India was making undue hue and cry,” he said.

Qureshi also informed that he was going to attend House of Common (London), wherein, he would highlight  Pakistan’s view point on Kashmir issue.

The Foreign Minister maintained that Pakistan’s relations with many countries had been improved further due to successful diplomacy of the incumbent government. He informed that Saudi rulers would visit Pakistan on February 18 and there would be more engagements between the two brotherly countries.

New agreements are also expected during this visit, Qureshi stated.
He said that relationships with Qatar, UAE and some other countries had also been improved. He also informed that he recently visited Oman and ties with it were also heading towards new height of betterment.

Responding to a question about 18th amendment, Shah Mehmood Qureshi said that Opposition parties were making undue hue and cry as there was no threat to the 18th amendment, constitutional rights of the provinces and democracy.
However, there could be threat to personal interests of some individuals, he said.
Qureshi said the PTI government had immense respect for constitutional rights of the provinces.
About PML-N and PPP apparent deal, Shah Mehmood stated that PTI had not made any deal with Shahbaz Sharif. However, PML-N and PPP were uniting.
To another query, Qureshi maintained that masses were real decision making power and they gave decision in favour of PTI in last general elections.
Qureshi stated that NAB cases against PPP and PML-N were not made during PTI regime but these cases were instituted by PML-N and PPP themselves against each other during their past tenures.
When questioned whether PTI government will be able to recover looted money, the foreign minister said the PTI government would try its best to recover the plundered money from corrupt elements.
Shah Mehmood Qureshi in response to a question about sindh government, stated the federal government would not make any effort to dislodge Sindh government. The real threat to the Sindh government was not from the PTI but it was from its poor governance and corruption.
In another reply, Shah Mehmood Qureshi said that PML-Q had no reservations against the PTI government.