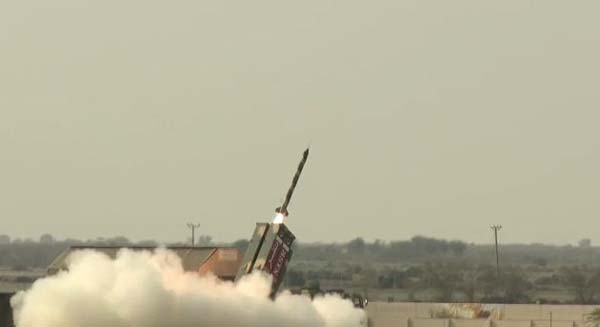 ISLAMABAD, Jan 31 (APP):Pakistan has conducted another successful launch of short range surface to surface ballistic missile “Nasr” as part of Army Strategic Forces Command training exercise which included quad salvo on 24 January and single shots on 28 & 31 January, 2019.
According to Inter Services Public Relations (ISPR), the 2nd phase of this exercise was aimed at testing the extreme in flight maneuverability, including the end flight maneuverability; capable of defeating, by assured penetration, any currently available BMD system in our neighborhood or any other system under procurement/development.

The launch was witnessed by General Zubair Mahmood Hayat, Chairman JCS Committee, Director
General Strategic Plans Division, Commander Army Strategic Forces Command, Chairman NESCOM,
senior officers from the Army Strategic Forces Command, scientists and engineers of strategic
organizations.
The Chairman JCS Committee appreciated the participating troops, scientists and engineers on
achieving yet another milestone of national significance towards Pakistan’s strategic deterrence
capability.
He praised the professional attributes and dedicated efforts of all concerned which made possible
the successful launch of Weapon System.
President and Prime Minister of Pakistan along with Services Chiefs have congratulated the scientists,
engineers and the participating troops on their outstanding achievement.