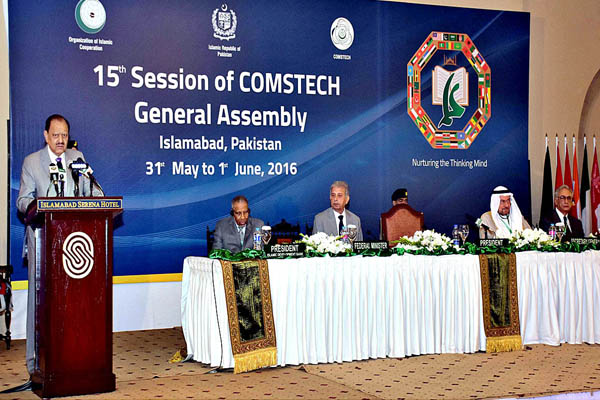 ISLAMABAD, May 31 (APP): President Mamnoon Hussain on Tuesday urged upon the Muslim countries to join hands in promotion of science and technology to find ways to end poverty and ensure provision of basic facilities to their people.

“Muslim countries need to increase their budget for scientific
research as skillful human resource is the basis of a developed society,” the President said in his address at the inauguration of 15th session of Organisation of Islamic Cooperation’s Standing Committee on Scientific and Technological Cooperation (COMSTECH).

Pakistan is hosting the two day COMSTECH General Assembly in the capital, where delegates from 57 Muslim countries have gathered to propose a 10 year plan worth $2.1 billion comprising initiatives for promotion of science and technology.

President Mamnoon Hussain, also the Chairman COMSTECH, said promotion of science is the best expression of human abilities and mentioned that for the same reason, the Muslims scientists had played a significant role till 16th century.

He regretted that despite abundant resources, the contribution of Muslim countries at present for science and technology was negligible.

He mentioned that in comparison with the developed world, the combined budget of Muslim countries in the field of science and technology was only 2.4 percent, the ratio of research papers was six percent and internationally recognized patent inventions were just 1.5 percent.

“Due to this backwardness, we have not been able to prepare scientists and engineers and are relying on developed countries to fulfill our technical needs,” he said.
Mamnoon Hussain termed scientists the “best asset of a
society” and expressed hope that the conference would prove successful in reviving the glowing Muslim traditions of a strong scientific foundation.

He lauded COMSTECH for initiating several programmes for
promotion of science and technology including training courses, workshops and seminars besides providing scholarships to scientists of members countries.

He expressed confidence that the conference would help the OIC countries achieve the Untied Nation’s Sustainable Development Goals.

Secretary General OIC Iyad Ameen Madani said the world was facing challenges related to energy, environment and water scarcity, to which, he said socially sensitive solutions based on innovation was need of the hour.

Turkey’s ambassador to Pakistan Babur Girgin read out the
message of Turkish president Recep Tayyip Erdogan, who is the current OIC Chairman.

Federal Minister for Science and Technology Rana Tanvir
Hussain said Pakistan was committed for the promotion of innovation and scientific research for betterment of people’s lives.

President Mamnoon, later, also addressed the plenary session of the General Assembly, where he expressed satisfaction over the 10 year plan which was a contribution of 150 scientists from 20 OIC states.

He asked the Coordinator General Assembly to work out a plan to promote scientific research particularly in under developed Muslim countries.

He also appealed to the delegates from Muslim countries to
pray for the health and early recovery of Prime Minister Nawaz Sharif, who is undergoing a cardio surgery in London.