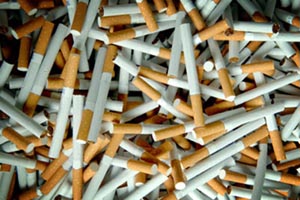 ISLAMABAD, May 4 (APP): The illicit trade of cigarettes, considered one of most serious challenges to national economy, deprives national exchequer of Rs. 24 billion revenues per annum.
Around 19.5 billion illicit cigarettes were consumed in 2014, out of which 17.3 billion or 89 percent were local non-duty paid.
In a Nielsen report entitled “The Challenge of illicit Trade in Cigarettes,” it was revealed that in addition to billions of rupees revenue loss to government, local non-duty paid cigarettes undermine country’s public health objectives by giving easy access to youth and encouraging them smoking by selling cigarette packs below the minimum tax payable on a pack.